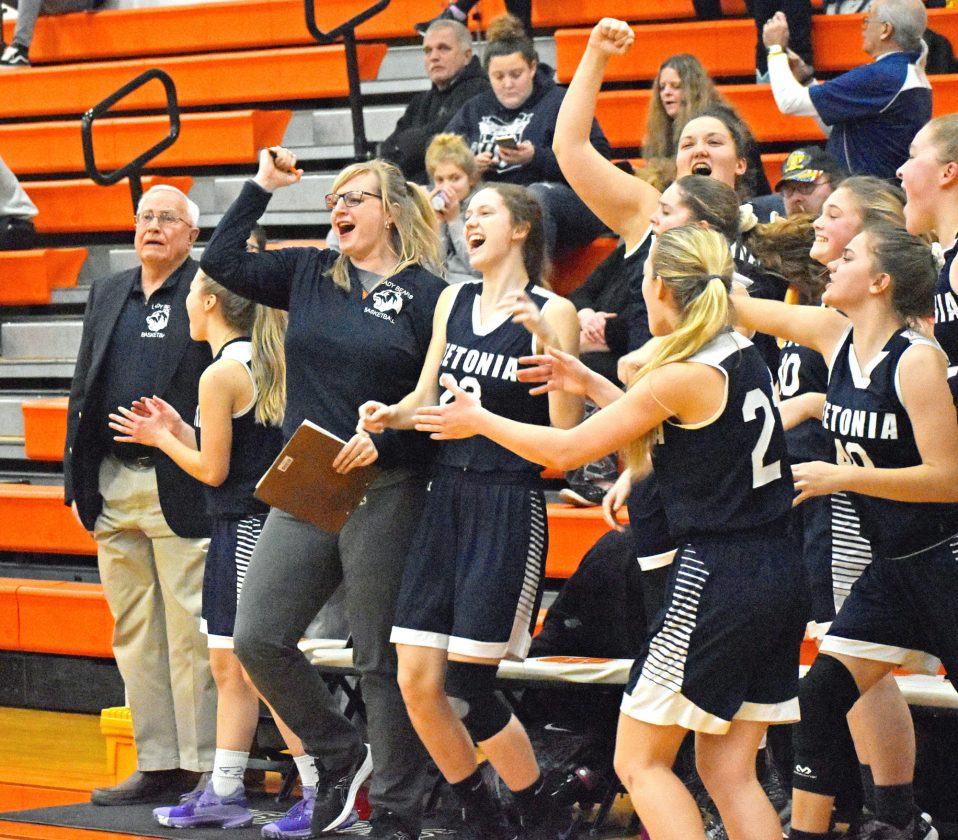 Leetonia’s bench erupts after a 67-44 win over Wellsville on Thursday at Wellsville High School. The win was Leetonia coach John Hritz’s 500th of his career. (Photo by Chris Rambo)

WELLSVILLE–Through 38 seasons and three different schools one thing has remained constant for Leetonia girls basketball coach John Hritz. The game has always been a labor of love.

“When it starts feeling like work, then I’ll step aside,” Hritz said.

Hritz achieved the biggest milestone in his long career on Thursday when he notched his 500th victory as the Bears downed Wellsville 67-44 at Wellsville High School.

Leetonia improves to 6-4 overall and 3-3 in the Eastern Ohio Athletic Conference. Wellsville falls to 3-10, 1-6.

“It’s an overwhelming feeling, I never thought I’d see this day,” Hritz said. “I know the kids were out there working hard tonight. They wanted to be a part of this milestone. I’m really proud of them.”

Hritz is in his sixth season at Leetonia after stops at Struthers and Liberty where he racked up three district titles, five district runners-up and six conference titles.

The common thread through the years has been the relationships he’s developed with his players.

“The kids have been great every step of the way, I couldn’t have done it without their dedication,” Hritz said. “The camaraderie is something I’ll always remember. I’ve always tried to be honest with the kids and let them know where I’m coming from and what I expect of them. They’ve been able to come through over the years. It’s a very special feeling.”

After resigning from Liberty in 2011, Hritz found a new home at Leetonia in 2014. He’s compiled a 63-52 record during his time with the Bears and has helped get the program pointed back in the right direction.

“I love it here,” Hritz said. “The kids are wonderful. They work hard and give me everything I ask. It’s a terrific place to coach.”

As the clock ticked down, the Leetonia bench broke out in celebration. Leetonia’s lone senior Anna Buffone (who finished with 10 points and five steals) said the Bears took the court especially motivated to deliver Hritz his milestone victory.

“Coach (Hritz) deserves this a lot and we really wanted to get the win for him tonight,” Buffone said. “I’ve been with him since my freshman year and that’s when we really started winning. He’s taught me to stay patient on the court if things aren’t going right. Things will eventually fall into place if you keep hustling.”

Freshman guard Ella Gregorino powered the Bears with a game-high 22 points and said she has already learned a lot from Hritz in a short amount of time.

“He’s taught me a lot of the moves that I did and taught me how to become a more complete player,” Gregorino said. “I love the way he motivates the team and prepares us to play hard every single game.”

Leetonia overwhelmed Wellsville with defensive pressure in the first quarter, as the Bears went on a turnover-fueled 18-2 run to establish a 24-8 lead. The Tigers got no closer than nine the rest of the way.

“We were getting really flustered by their ball-pressure,” Wellsville coach Corey Creamer said. “We played hot-potato with the ball too much.”

The Tigers were led by 13 points from Hunter Weekley and 12 points, seven rebounds, four steals and four blocks from Cameron Carlevale.

Creamer knows a lot of hard work is still ahead as he tries to rebuild Wellsville’s program. Although it hasn’t translated into a lot of wins yet, he’s encouraged by his young team’s effort level.

“There’s a lot of times we’ll have early-morning practices, those girls come in and they don’t complain,” Creamer said. ‘They keep working hard day after day on the court and in the weight room. Overall, we’re playing hard. We just have to learn to keep pushing through adversity.”

Now that he’s got win number 500 out of the way, Hritz said he has no plans to stop any time soon.

“I want to keep going at least another 10 years god-willing,” Hritz said laughing. “I still love working with the kids every day, they make it a lot of fun for me.”

• Two of Hritz’s former Leetonia players Kristy Eckman and Elizabeth Mills were on hand to help him celebrate.

• The Bears donned special T-shirts after the game to commemorate the occasion.

• Allison Francosky had a solid night for the Bears with nine points and 10 rebounds. Taran Ferry added eight points and eight assists.