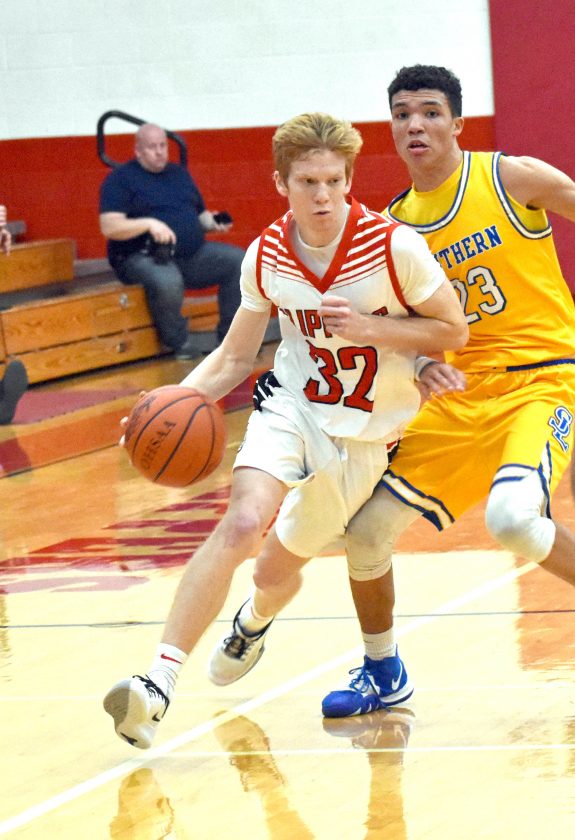 COLUMBIANA–When Todd Johnson took the Columbiana job four years ago, games like Friday were what he had in mind.

In front of a rowdy crowd, with first place in the Eastern Ohio Athletic Conference on the line, the Clippers used a third-quarter barrage to dispatch previously unbeaten Southern Local 62-51 at Columbiana High School.

“These eight seniors were freshmen when I took over,” Columbiana coach Todd Johnson said. “I was really excited about their potential. To see them win a game like this in front of our fans is a tremendous feeling.”

The Clippers got 22 points and six rebounds from senior Sean Whitehead as they improve to 9-2 overall and 5-0 in the EOAC, grabbing sole possession of first place. Southern falls to 9-1, 4-1.

“This is a great feeling, I don’t really know what else to say,” Whitehead said. “Everyone contributed tonight, it was a great team victory.”

The Indians wiped out an early five-point deficit and surged in front 33-26 at halftime before the Clippers walloped them with a 23-2 run to start the third quarter.

Whitehead got things rolling with four straight points before Carter Pasco buried the game-tying three-pointer less than two minutes into the frame. Two minutes later, Whitehead sank a three to put the Clippers in front to stay.

After threes by Pasco and Ryan Fahs stretched the Clipper lead to 42-35, Whitehead caused the crowd to erupt with another three, making it 45-35 with 2:26 to go and prompting a Southern timeout. The Clippers landed a quick four points after that, swelling the lead to 49-35.

“We knew we had to put them away early in the third quarter and that’s what we did,” Whitehead said. “I don’t really remember too much about what went on, but we just went out there and got the job done.”

Five of Columbiana’s nine three pointers came in the third quarter. Pasco had a team-high four threes as part of his 14 points. Fahs added nine points.

“We have a lot of good shooters on the floor,” Whitehead said. “It doesn’t matter who we rotate in, we always have a three-point specialist out there that the defense has to account for.”

The Indians didn’t go quietly, however, as they responded with a lightning-quick 11-0 run to slice the lead to 49-46 with 7:42 left. A large part of the comeback was fueled by Cam Grodhaus, who finished with a game-high 24 points to go with six rebounds and four steals. Bradly Sloan added 10 points and six rebounds. Brock Smalley had six points, four steals and four assists.

“The kids came together and fought hard after falling behind, but you can’t let them get up by 14 and try to claw all the way back,” Southern coach Gerard Grimm said. “The bottom line is, they just made shots tonight. Most of them were contested, they just did a good job of knocking them down.”

The Columbiana defense helped carry the Clippers to the end. After a couple of key buckets by Fahs made it 55-49 with six minutes left, the Indians scored just two points the rest of the way.

The Clippers entered the double-bonus with 1:43 left and iced the game at the foul line.

“What I’m most proud of is our ability to get consecutive stops in the second half,” Johnson said. “We wanted to make sure we switched on screens and tried like heck to stay in front of their guards. Both Sloans (Bradly and Jayce) are very athletic, Grodhaus is a heck of a player too. I think we did a good job of denying them open looks and holding them to one shot.”

“We need to move on,” Grimm said. “You can’t change what happened tonight as much as we’d like too. We need to make sure we stay together.”

“Now we’re the hunted,” Johnson said. “We have to step up our game even more going forward.”

• The Clippers and Indians will have their rematch on Tuesday, Feb. 4 at Southern.

“Southern is a phenomenal team,” Johnson said. “There is a reason they were undefeated walking in here tonight, there’s a reason they have all their accolades. I have no doubt we’ll have a war down there.”

• Forward Matt Mazei only scored six points for the Clippers, but came up big on the boards and on defense with nine rebounds and five blocks. Guard Hunter Zentner added seven rebounds.