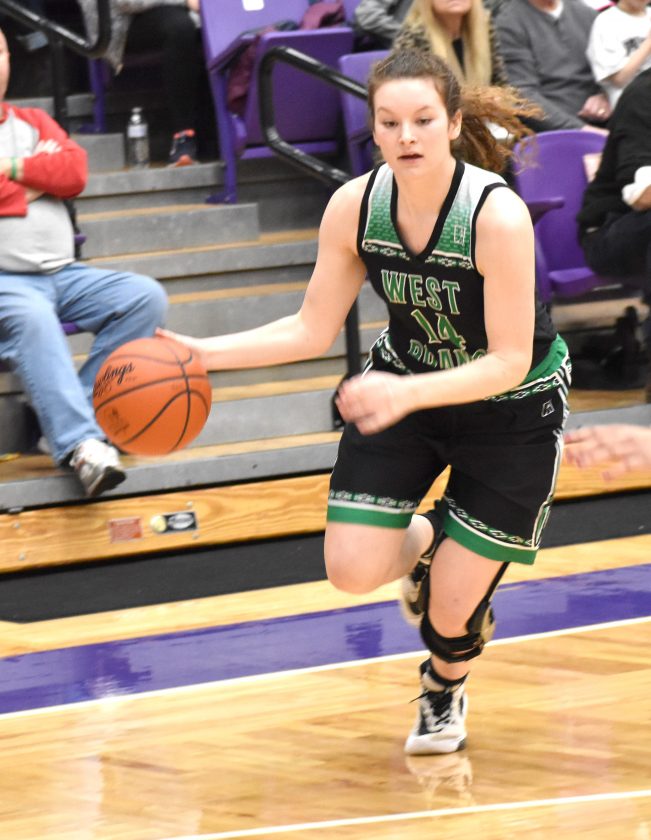 BARBERTON–The West Branch girls basketball team may have been underdogs on paper in Friday’s Div. II regional final against Shaker Heights Laurel, but each member of the team got on the bus with absolute confidence that they could win.

“You gotta believe,” West Branch coach Walt DeShields said. “We thought there were a lot of similarities between this team and the 1997 team that upset Garfield Heights Trinity in the regional final. Both had senior classes that refused to lose. Nobody gave us much of a chance that year either. We just kept telling the girls to believe in themselves. You have to have belief to beat a great team like Laurel.”

The seventh-ranked Warriors delivered one of the most memorable nights in the proud history of the program by knocking off the sixth-ranked Gators 41-37 Friday at Barberton High School.

“This is the best feeling I’ve ever had,” West Branch senior Hannah Ridgway said. “It’s a dream come true. We’ve been building to this moment all season. We had a ton of confidence, we knew that every team is beatable as long as you play hard and don’t give up.”

It is the fourth regional title in school history for the Warriors (24-3) who advance to take on Dayton Carroll in a state semifinal at 1 p.m. Thursday at Ohio State University’s St. John Arena in Columbus. West Branch’s last trip to state was 2015. 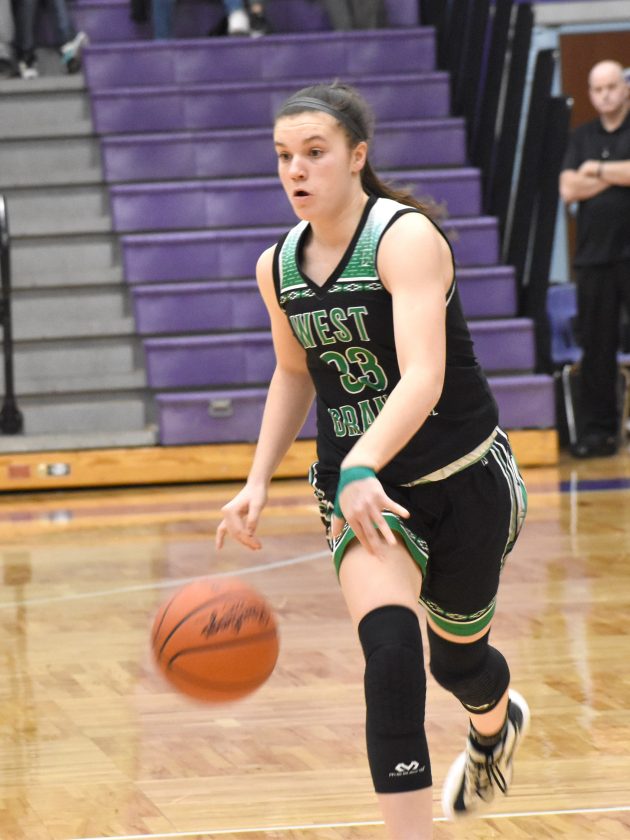 “This is everything we’ve ever dreamed of,” West Branch senior Carly Scarpitti said. “We knew coming into tonight that our dream was right in front of us and all we had to do was fight the whole game. That’s exactly what we did.”

The Gators (23-4) came into Friday’s championship game having easily handled two opponents (Canfield and Hoban) that beat West Branch during the season and boasted length and shooting all across the floor.

However, the Warriors took the fight to Laurel right out of the gate with an 11-1 burst to start the game. They never trailed the rest of the night.

“That start boosted our confidence a whole lot,” Ridgway said. “We had so much energy coming out and it just carried over for the rest of the game.” 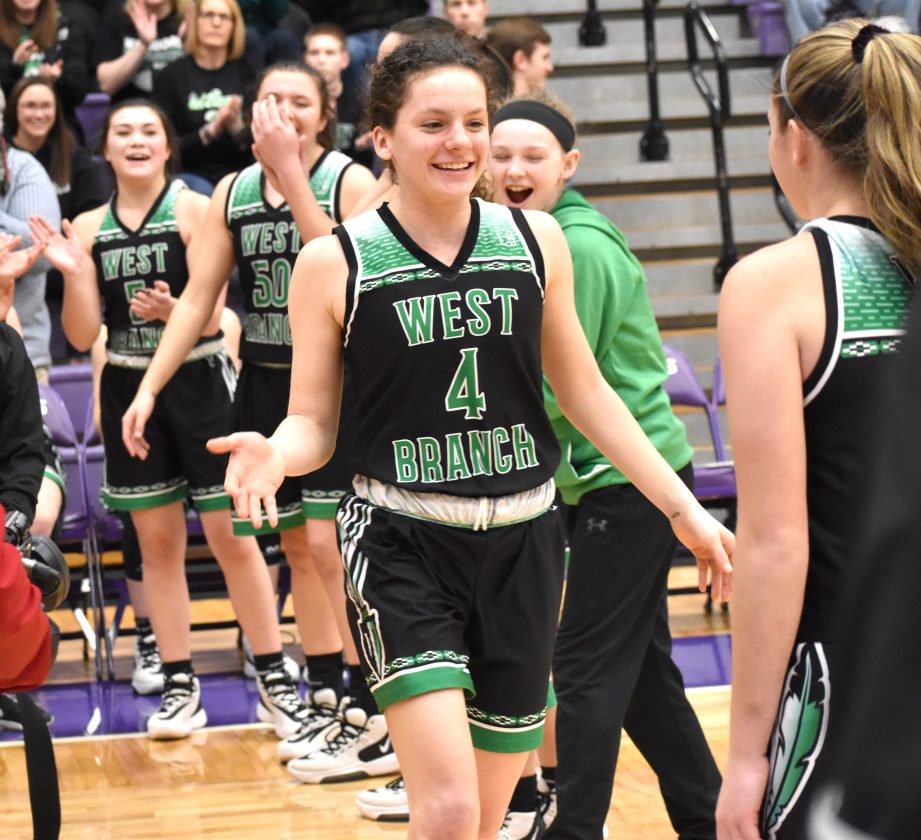 The main story again was West Branch’s defense which made the Gators work hard on every possession and enabled the Warriors’ lead to stay around six or seven points for most of the night.

“We really focused on boxing them out every time and making it harder for them than any other team has done this year,” Bock said.

The 37 points were a season low for Laurel.

“Defense has been the key for us all season, that’s where we put a lot of our focus,” Scarpitti said. “That wasn’t going to change in this game. We knew if we could play solid defense for 32 minutes, we could get it done.”

Laurel went on a 7-2 run to cut West Branch’s lead to 23-19 with two minutes left in the third, but the Warriors answered right back with a Jillian Pidgeon three and a Hannah Ridgway drive to the hoop to make it 28-20. A baseline jumper by Peyton Alazaus and a tough floater by Scarpitti made it 32-22 West Branch with 5:45 to play. 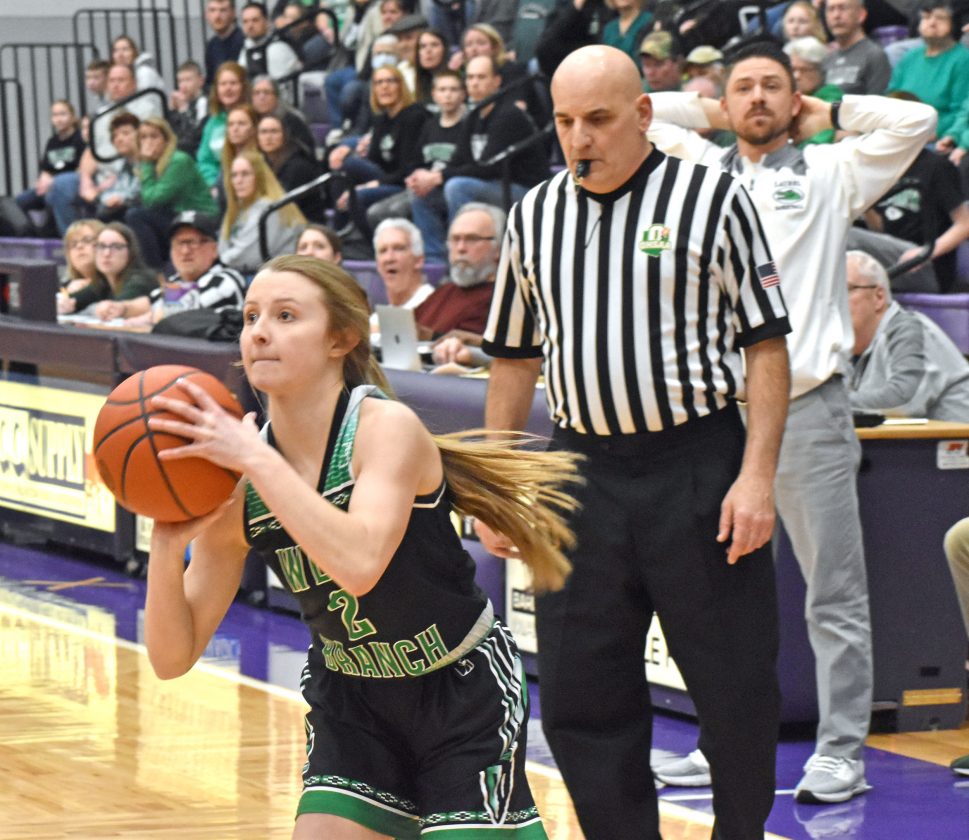 Alazaus led the way with 11 points for the Warriors, while Scarpitti added nine points. Mari Bickley (17 points) and Taylor Thierry (10 points) accounted for 27 of Laurel’s 37 points. The Warriors were all over the floor the whole night fighting for rebounds and loose balls.

“We imposed our will on them with a great start, but we knew it was going to be a 32-minute game,” DeShields said. “Defense wins championships and to hold them to that score is a testament to how hard we played. We sat down and guarded, we rebounded and we scrapped and fought for everything.”

With just under two minutes left, the Gators made one last run. They closed the lead to 34-30 and forced a turnover. But Peyton Alazaus came right back with a steal at midcourt that she turned into two made free throws, bringing it to 36-30.

Bickley airballed a three with a minute left and the Warriors began to work on the clock.

When Hannah Ridgway cashed in an open layup with 16 seconds left, the lead was 39-31 and the West Branch fans began to celebrate. 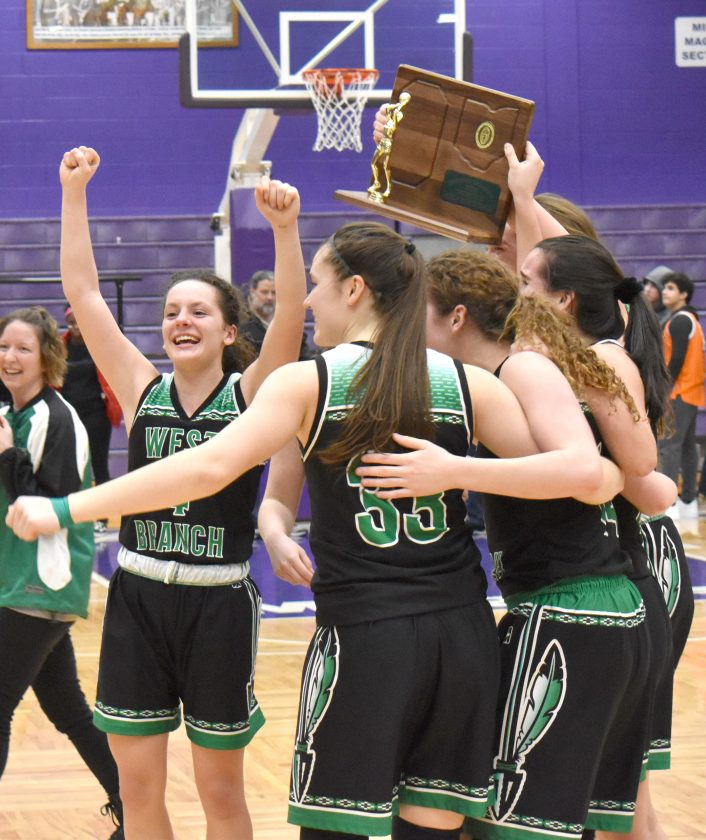 Afterward, the Warriors lingered on the court long after the final buzzer in a moment nobody wanted to end.

“Tonight is about family and friends,” DeShields said. “It’s about teammates playing for each other. Our community really came out to support us tonight and that’s what it’s all about. Our girls dedicated this game to a lot of their family members and community members that have been around a long time. We have a pretty darn good basketball team and we showed how gritty we are tonight.”

• Bock’s sister Lea was a member of West Branch’s 2015 state semifinalist that fell to Toledo Rogers.

“I grew up watching my sister’s team make it,” Jessica Bock said. “A lot of us were sitting in the stands for that and we wanted that moment too.” 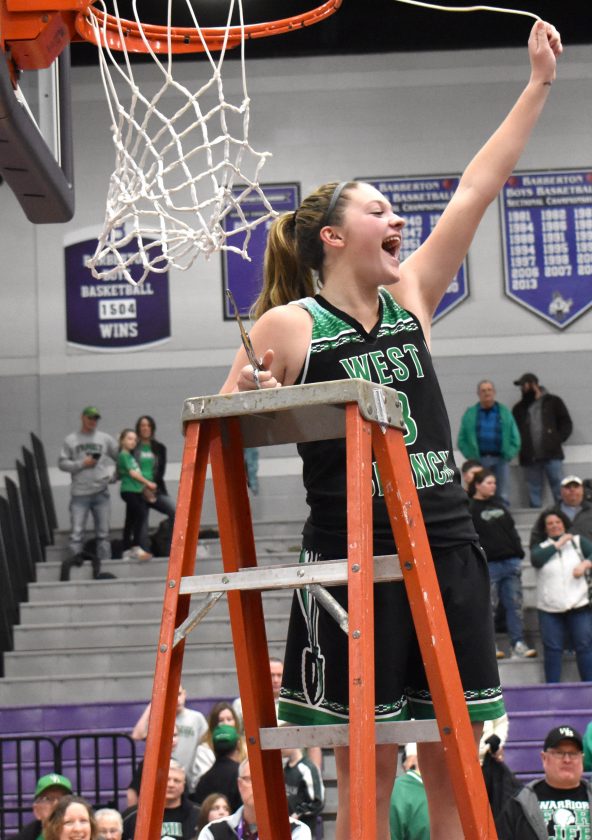 • Laurel made 10 threes in its semifinal victory over Norton, but didn’t connect from deep until the 5:16 mark of the fourth quarter Friday.

“That’s unbelievable,” Scarpitti said. “It all comes back to defense for us. We told everyone they had to play as hard as they’ve ever played.”

• DeShields singled out assistant coach Lou Sellaroli after the game. Sellaroli has nearly 40 years of coaching experience and will be making his first trip to state.

“I’m real happy for him,” DeShields said. “He’s been coaching for almost 40 years. A lot of people never get the chance to get down there.”

• Third-ranked Napoleon will play eighth-ranked Tri-Valley in the other Div. II semifinal at 3 p.m. Thursday.

• Both student sections were at peak volume all night, creating an intense atmosphere.

• The Warriors celebrated Friday’s win by cutting down the nets. 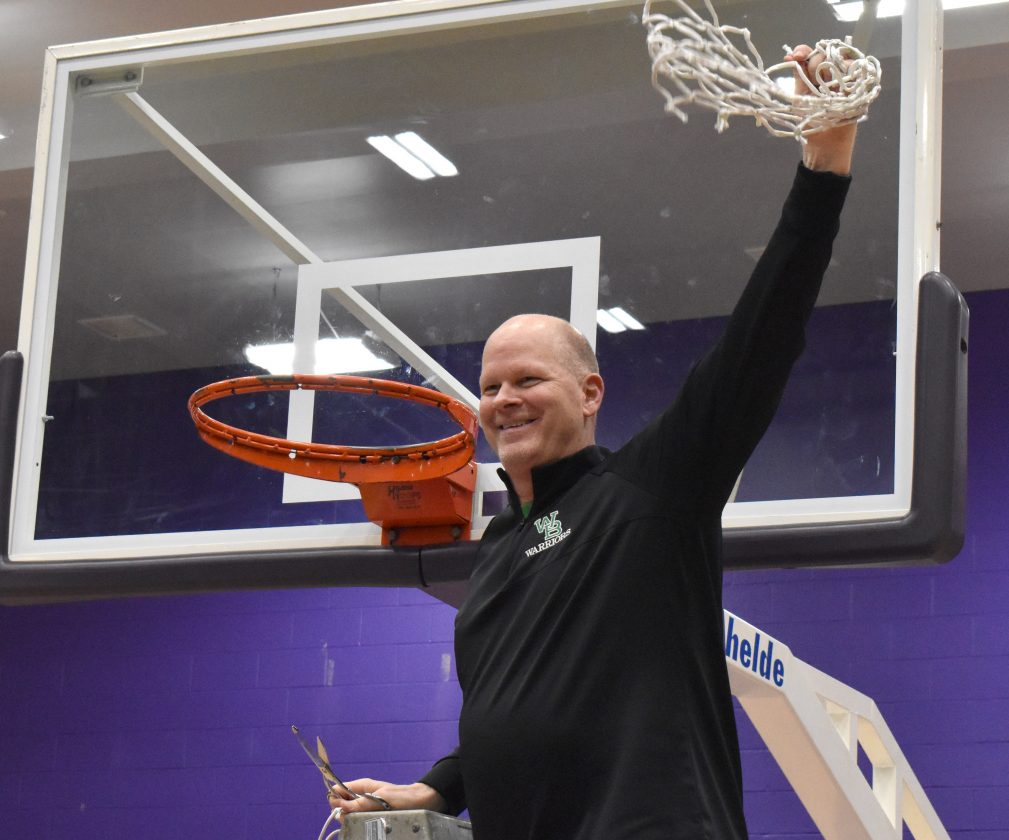 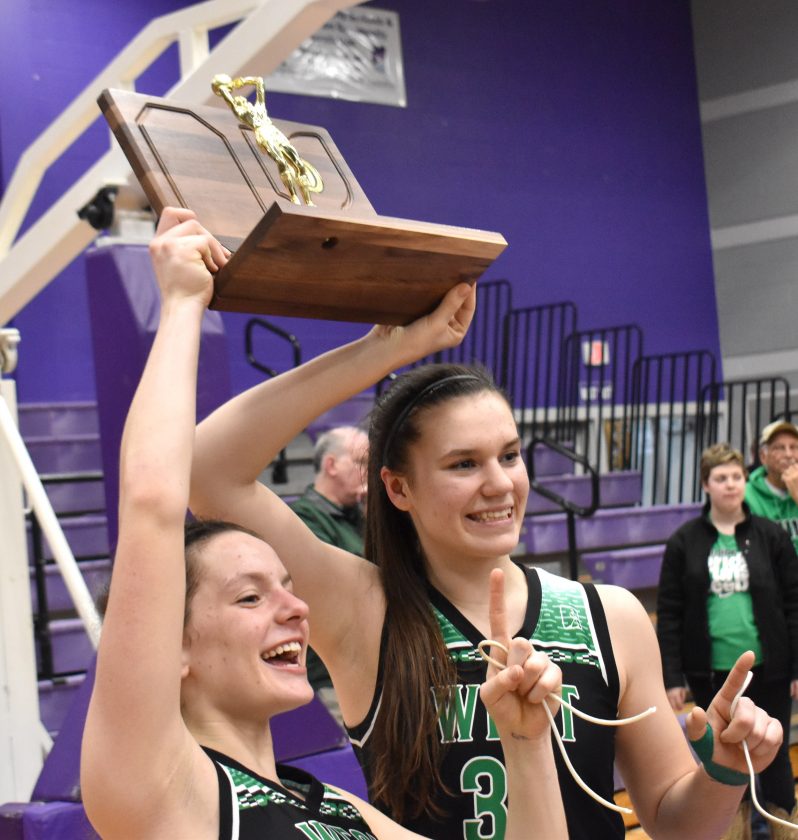