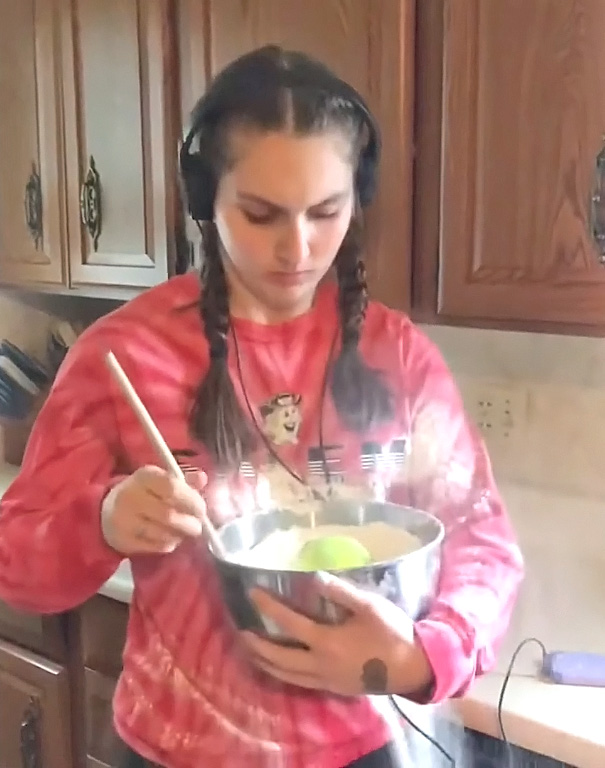 Salem softball player Chase Toy finds a ball in her mixing bowl in the video.

SALEM –The Salem softball team might be on the sidelines like all the rest of the spring sports athletes in the state of Ohio, but the Quakers found a way to play catch recently.

Using video clips of team members and coaches catching and tossing the ball in creative and sometimes humorous situations, the Quakers were able to edit together a three-minute video set to the tune of John Fogerty’s “Centerfield”.

The video can be found by searching for “Salem Quaker softball Playing catch challenge” on YouTube.

“It’s just something to do to lift their spirits and show off their personalities,” Salem head coach Mike Thorpe said.

The video includes such moments as coach Kristin Toy catching the ball while reclining with a bunch of “snacks”, Chase Toy finding a ball in her mixing bowl, coach Kim Colian wiping down a ball with a Clorox wipe and head coach Thorpe doing his best rockstar impression.

Thorpe said he got the idea to do the video from the University of Louisville softball team. He collected clips from the team members and coaches over a five-day period and then edited it together in about an hour. He managed to get 20 of the 23 players in the clip.

“Some sent in one clip and others multiple clips, so there was more time spent on deciding what to use than editing it,” Thorpe said.

While the Ohio High School Athletic Association currently prohibits in-person communication between athletes and coaches, digital remote communication is allowed. Thorpe said he and his coaches try to keep in contact with the players every day even if it’s just a text message to offer support.

Thorpe said it’s been tough spring so far. The first shoe to drop for the Quakers was when the team’s spring break trip was canceled while everyone was still in school. Then the schools closed and everything was put on hold.

“When we couldn’t have contact with each other, that’s when it set in for most of them,” Thorpe said.

Thorpe said he feels especially sad for the five seniors as it might be possible that no games will be played this spring.

“We have a lot of one-sport athletes on our team too,” Thorpe said. “Softball is the only thing they do and that’s been hard on some of them.”

Thorpe said the team isn’t immune to the real life issues going on now with the coronavirus pandemic.

“There’s a lot of uncertainty going on and everyone has their own personal concerns,” Thorpe said. “We’ve got players with parents who are nurses on the team and they might not be seeing a lot of them in the coming weeks. They’re are kids who are worried but it’s at a different level for each individual.”

Also featured in the video is a team logo designed by Elly Exline. Exline made the logo for team sweatshirts which the team had ordered.