Raiders had a great ride

Special to the Journal 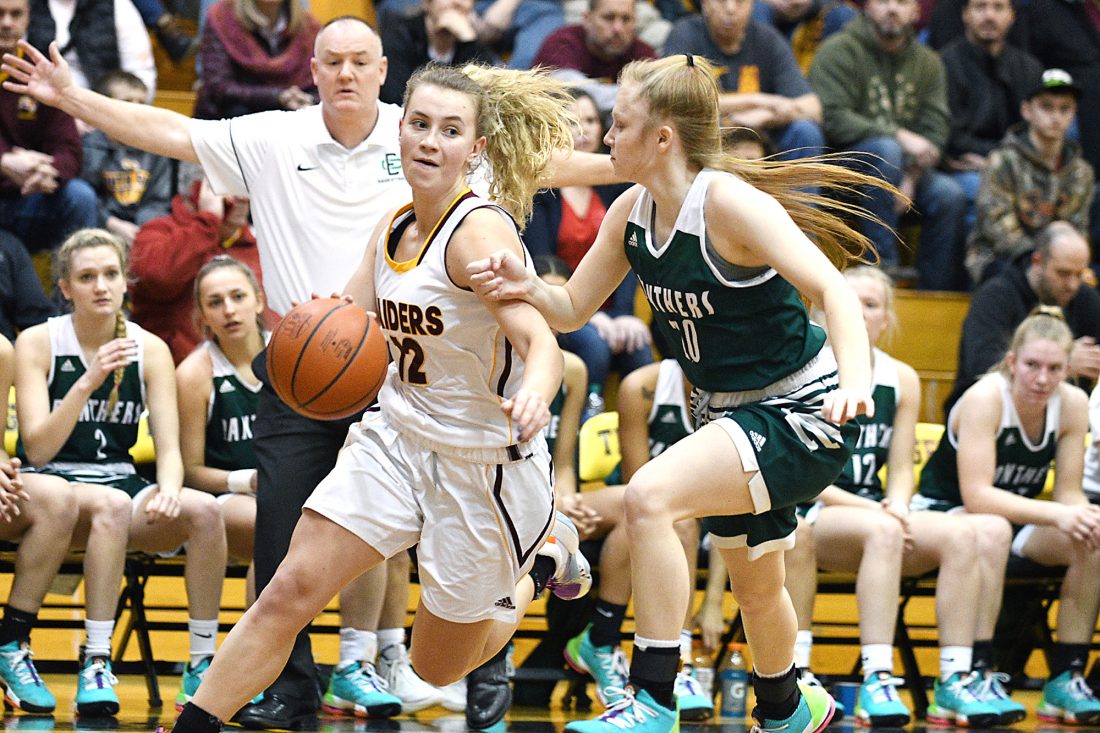 CUYAHOGA FALLS — The South Range girls basketball team battled to the very end, but was unable to take down Elyria Catholic, falling to the Panthers 51-37 at Cuyahoga Falls High School on Saturday afternoon in a Division III regional title game.

South Range got off to a hot start, jumping out to an 11-4 lead early in the first quarter. The Panthers found their footing however, and were able to close the gap to 11-9 at the end of the quarter.

Elyria Catholic continued to use its size to advantage, wearing down the Raiders as the game went on.

“We had a game plan and we knew that when they shot the ball that we would have to box out and rebound,” Fishel said. “Sometimes you can’t coach height and you can’t coach size and they had the advantage there. We played our hearts out, but hats off to Elyria. That’s a phenomenal team with great experience. They had a great game plan and those big girls wore us down, and congratulations to them.”

Junior Izzy Lamparty, who led the Raiders with 13 points, was in charge of guarding Elyria Catholic 6-foot-1 senior post players Abby Winnen and Ally Winnen. Both were bigger than the players South Range has seen most of the year which created mismatches when both were on the floor.

“Their set of twins they have, they’re pretty big and strong on the block, so we had a few mismatches that couldn’t really do much when our subs went in,” Lamparty said. “They weren’t really prepared because none of us really have played against people that size.”

South Range found itself in another hole coming out of the half, but late in the third quarter was able to rally back from an 11-point deficit to close the gap to four points going into the fourth.

The Panthers started the fourth quarter on another run and the Raiders responded to close the game to a five-point gap. The clock was in Elyria Catholic’s favor as South Range had to begin fouling and the Panthers pulled away once again to win.

The Raiders (21-7) made history by reaching the regional final for the first time in program history after beating Champion in the regional semifinals.

“It was really exciting to make history last game and we really wanted to win this game,” sophomore Lexi Giles said. “We played our hearts out and left everything on the floor and it’s disappointing that we lost, but we played our best.”

Giles finished the game with 12 points, nine of which came on 3-pointers. Bree Kohler added 10 points.

South Range loses only one player to graduation (Emily Irons) and is anticipating a return to the regional next year with more experience.

“Hopefully the taste of winning Wednesday and the bitter taste of losing today are two things that drive us into the summer for the offseason,” Fishel said. “We want to get back here next year and we want to be the ones cutting down these nets.”

Izzy Lamparty said she believes her team cannot only make it back to Cuyahoga Falls next year, but also move on to Columbus.