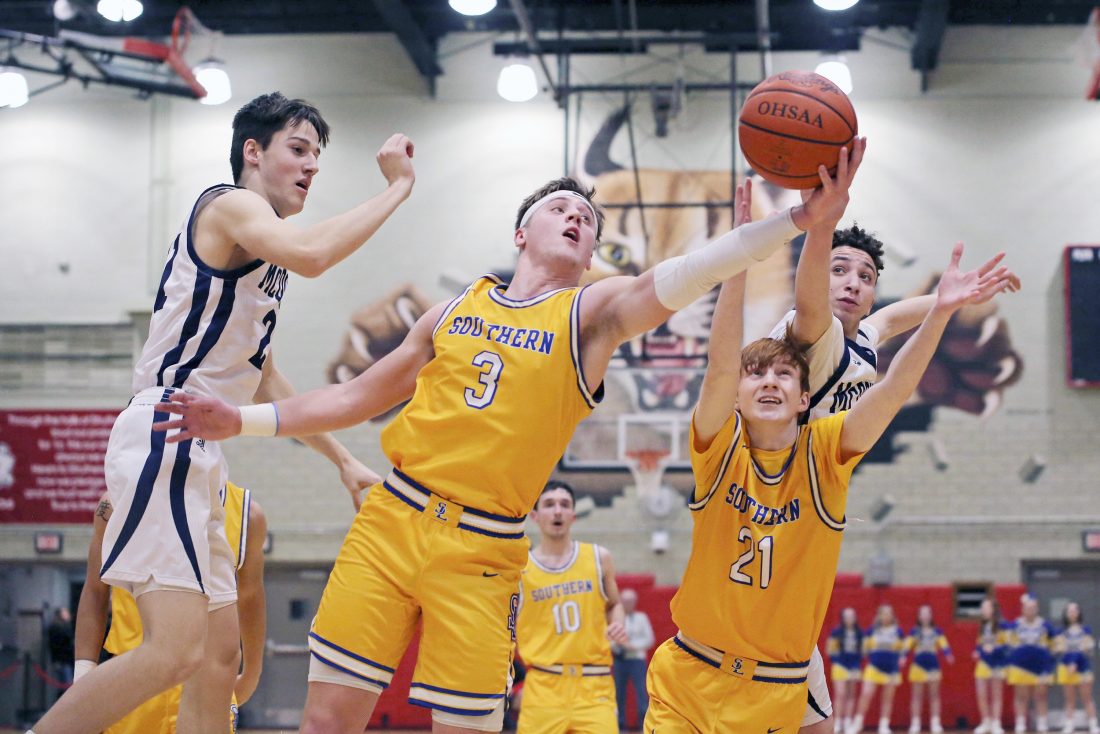 Southern’s Cam Grodhaus (3) and Sam May (21) have a rebound covered against McDonald’s Dominic Carkido (left) and Ziad Aziz in a Division IV district final Friday at the Struthers Fieldhouse. (Photo by Gary Leininger)

STRUTHERS – The second-seeded Southern Local Indians were looking to accomplish something that they have never done in program history Friday night. To win their first District crown. Unfortunately for the Indians, a furious fourth-quarter rally fell short in a 72-59 loss to the top-seeded McDonald Blue Devils in the DIV District championship at Struthers.

“Obviously we didn’t accomplish everything we wanted to do, but I wouldn’t trade any of it for anything that this year brought in a lot of laughs and a lot of love. I love every single one of these guys no matter what happens after this,” a disappointed senior Cam Grodhaus said.

“This season has meant a lot to me,” senior Jayce Sloan said. “From day one at practice to now, there hasn’t been a day where I haven’t had a laugh or a smile on my face. All the underclassmen and even the seniors they are brothers to me.”

The Blue Devils, courtesy of 50 points from Ohio’s No. 2 all-time leading scorer Zach Rasile, built a 26-point third-quarter lead before the Indians were able to cut the deficit down to just 6 at 63-57 with 1:38 remaining in the contest. However, the Devils were able to convert 9-of-10 free throws in the final 1:24 of the game to keep the Indians from completing a dramatic comeback attempt.

“With some of our guys picking up early fouls and having to go to the bench, we knew we wanted to apply pressure to them because we knew outside of Zach (Rasile) they really struggle to take care of the basketball,” Indians coach Gerard Grimm remarked. “So we weren’t able to get into that plan as early as we wanted to because of early foul trouble.”

As a consequence, both Jayce Sloan and Josh Pratt ended up fouling out of the game in the fourth quarter. Those player losses helped take some of the steam out the Indians’ desperate late-game rally.

Southern, playing in its fourth district final ever, closed out the season with a school-best 18-7 record.

The Indians struggled at the line, only converting 5-of-19 free throw attempts. They also started the game with cold shooting from the field as they only connected on 2- of-10 attempts.

“What did we lose by? Lost by 13 and we miss 14 free throws, that tells you the story,” Grimm said. “We don’t expect to be perfect, but if you go back to league championship games, OVAC qualifying games, that has been our Achilles heel. And we felt like we were past that.”

He also remarked about the cold shooting

“That was the biggest thing in the first half,” Grimm said. “They gave us opportunities to score and buckets we have been making for weeks, going full speed at the rim and we weren’t putting them in. We dug ourselves a hole.”

The Indians trailed by 17 with just over five minutes remaining in the game when Grimm subbed in freshman guard Brady Ketchum. Ketchum gave the Indians a much-needed spark as he scored five points and helped the Indians defense cause a few Blue Devils turnovers one resulting in a layup by Cam Grodhaus with 1:38 remaining to cut the Blue Devils lead down to 63-56. That is when Rasile and Dominic Carkido each knocked down 4 of 4 free throws to preserve the Devils win.

Following two consecutive three-pointers by Rasile to start the second half, the Devils enjoyed a game-high 26-point advantage at 42-16 at the 6:57 mark of the third period. Following a basket and free throw from Grodhaus at the close of the third quarter, the Indians trailed 48-29.

“We didn’t get as far as we wanted to go, but at the end of the day these kids can walk out knowing they have been the most successful team in school history,” Grimm said. “I’m sure there will be moments they look back on it with a little bit of disappointment, but I hope they look back at all moments of excellence that they enjoyed.”

“I told them in there (locker room) that football was my passion, but after this season, basketball is right with it. It has been one of my most favorite sports to play just because of these guys and the coaches around me. It has been very special to me,” Sloan said.

• Rasile passed Jay Burson and Luke Kennard, who is now with the Detroit Pistons, on Ohio’s all-time scoring list with 2,992 career points.

Jon Diebler has the career scoring record with 3,208 points.

• Southern also lost to McDonald, 96-43, the last time the Indians reached the district final in 2017. Rasile scored 23 points in that game.

• In 57 basketball seasons, Southern has captured eight sectional titles and is 0-4 in district finals.