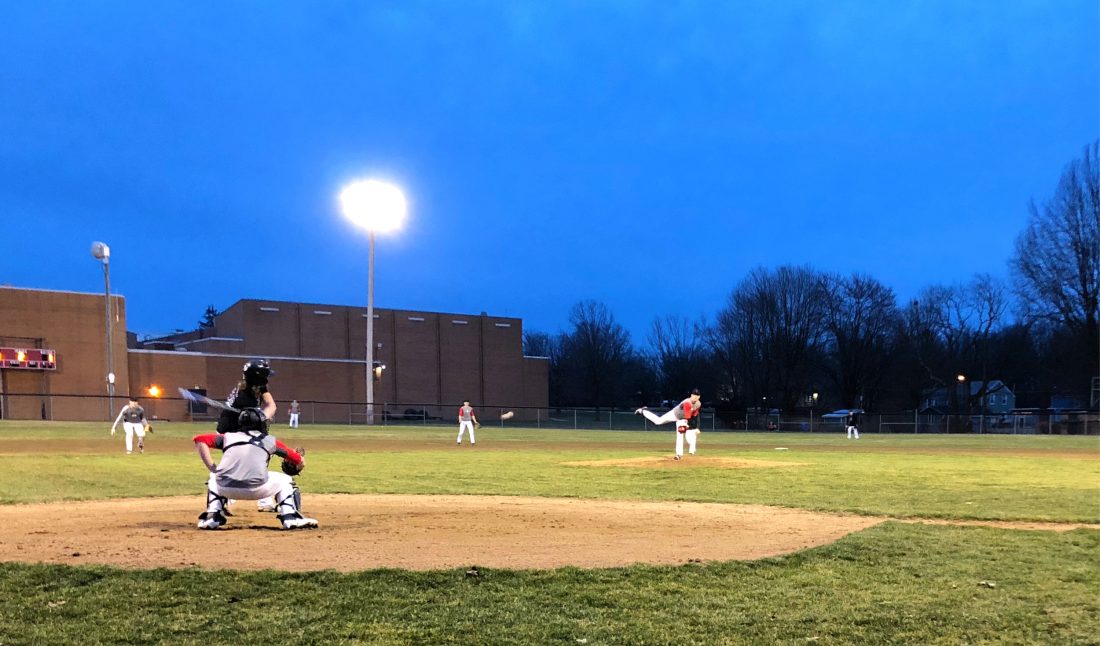 The Salem High School baseball team held an intrasquad scrimmage on Thursday night. The Quakers are thinking this may be their only game this year with the spring sports season in doubt due to the coronavirus pandemic. (Submitted photo)

Salem’s baseball team had a game under the lights on Thursday night and for a brief moment the sport was a refuge from what was going in the world.

But only for a moment.

“We had scheduled a normal practice for 5 p.m. at the football field, but once we got word that school was going to be shut down for three weeks, we decided as a staff to get everyone together for an intrasquad scrimmage under the lights at the high school,” Salem baseball coach Mike DeBarr said. “We felt that this might be the last chance for the seniors to play on our field.”

The team sent word around to get as many people as possible to the game and a decent crowd of mostly parents showed up. Pizza was brought in. The national anthem was played.

“It was weird,” DeBarr said. “It started off as normal and it was a good time, but then you started to see the emotion in the faces of the kids as the game went on. I think we all started to realize this might be the only game we play this season.”

Then the tears came.

“There were some players crying afterward,” DeBarr said. “Some didn’t want to leave.”

The Ohio High School Athletic Association announced Friday that there would be a no-contact period for all spring sports stretching from Tuesday until April 5. On April 6, teams can start practicing again and the games cam start again on April 11.

Of course all of this is tentative and with Ohio Governor Mike DeWine suggesting the peak of the coronavirus COVID-19 crisis won’t hit until late April or early May, the belief that spring sports could be played at all might be wishful thinking.

New Springfield softball coach Dan McKinstry, who had previously coached at East Palestine and is the current Wellsville volleyball coach, said he had a group of parents confront him at his car after a practice on Thursday.

“I was like, ‘uh-oh’ what is this?” McKinstry said. “When they told that schools were going to be shut and sports stopped for three weeks, I can’t really tell you what I said.”

It was more along the lines of disbelief than any complaint about the government’s actions.

“Look China is in week 10 of this and it’s starting to clear up, but look what they had to do,” McKinstry said. “Look at what is Italy is going through now and they didn’t get ahead of it. It’s hard to think we will have this under control in three weeks.”

McKinstry said he didn’t discuss that with his players though. He said he’ll meet with them once more at 2:30 p.m. today and after that he won’t be allowed to talk to them until the no-contact period is up.

A veteran of coaching since the ’70s, McKinstry said there has been no parallel to this moment. He said he could only think of the time in 1970s when an energy crisis was going on that East Palestine called off a few games over a multiple week period because the schools could not be heated properly.

Columbiana baseball coach Ryan Wolf said he was feeling great this week as the team got outside to practice three of the four days in nice weather — a rarity in March for Ohio high school baseball.

“Our last practice was the first time we had all 28 kids here,” Wolf said. “We were pretty hyped.”

Columbiana is expected to be in the running for the Eastern Ohio Athletic Conference title if the season gets played. The Clippers had a few special games planned too. On April 9, the team was set to play a game at PNC Park in Pittsburgh. On April 26, the Clippers would play at Canal Park in Akron.

“I have not heard anything about those games,” Wolf said.

He wondered if the April 9 game would even be possible if Major League Baseball started up the season at that point. Both games do not have an opponent as of yet but Wolf said that is not unusual for this time of year.

Some teams, like Salem’s baseball team, plan special trips during spring break to play games at Myrtle Beach or in Tennessee. The Ohio High School Athletic Association is urging all schools to cancel these trips.

The Quakers had their Myrtle Beach trip scrapped already.

“It was the first shoe that dropped,” DeBarr said.

“I called and wanted them to tell me if it would be held and they told me everything was fine and that they were not in crisis mode down there due to the warmer climate not allowing the virus to spread as widely,” DeRose said.

The Raiders usually arrive for the Grand Strand Classic on Easter Sunday and then spend the week playing games. Even if school and sports resume as normal, it may not be possible to travel to the tournament.

“If they decide to scrap spring break due to school being off three weeks, we won’t be able to go,” DeRose said. “The rules state that if school is in session, you can’t travel to play out-of-state games.”

East Liverpool’s baseball team was also among the teams excited for the season to start. Coach Brian May said he thinks the team has the ability to show vast improvement over last season.

The East Liverpool baseball field was also looking better to May and the Potters since the students involved in the school’s horticulture and landscaping program were ramping up their work to make improvements on the field.

All that work has been suddenly halted.

“It’s really bad timing,” May said. “They have made so many updates.”

May said he understands the seriousness of the situation though and is glad that everything has been put on hold.

“I don’t want to see anyone get sick,” May said. “Health is the most important.”