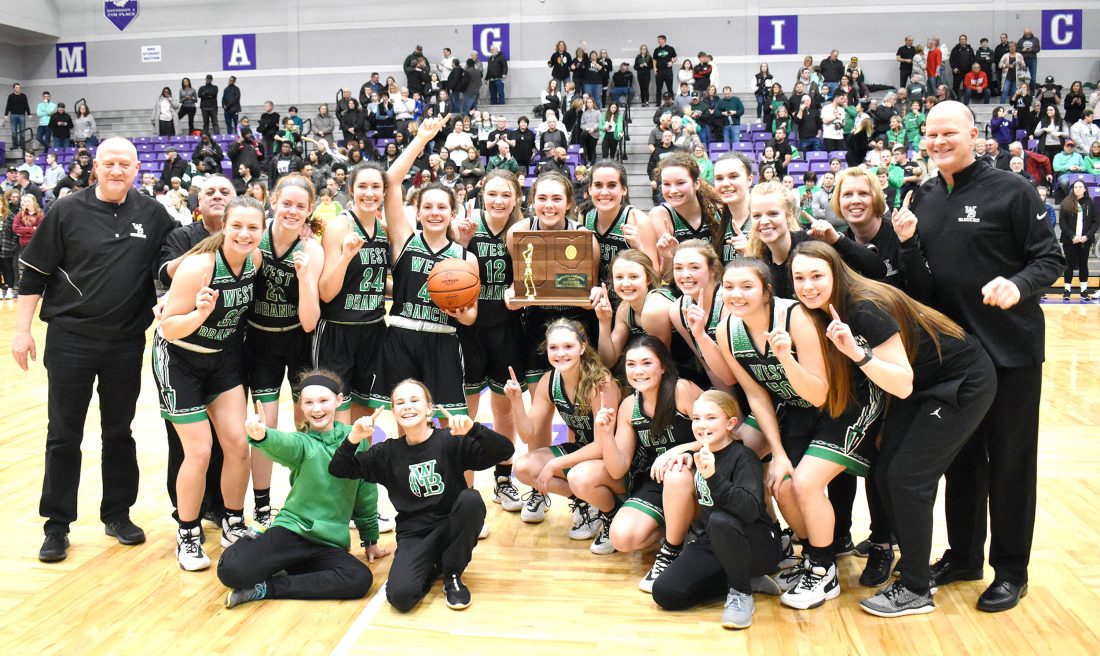 BELOIT–There have been plenty of very good girls basketball teams to pass through West Branch High School over the years, but the 2019-2020 squad now belongs in the most select company.

The Warriors will take their place alongside the 1997, 2004 and 2015 state qualifiers when they step on the floor at Ohio State University’s St. John Arena to take on Dayton Carroll in a Div. II state semifinal at 1 p.m. today.

“This group is in rarefied territory for sure,” West Branch coach Walt DeShields said. “What stands out about them is their grit and competitiveness. They’re all hungry to prove themselves.”

Coming off a down year (by their standards) in 2018-19, the Warriors entered this season with a senior-laden team and the program’s usual high expectations of a deep tournament run.

Even so, not many of them completely saw what was about to unfold.

“I actually wrote down getting to state on the goal sheet that coach DeShields gives us at the beginning of the year, but honestly I wasn’t thinking about it a whole lot,” West Branch senior center Jessica Bock said. “I was more focused on just taking things one game at a time.”

“We knew we wanted to go far, but I don’t know if we expected this back at the start of the year,” West Branch senior point guard Carly Scarpitti said. “It’s always a dream to get to state, but we knew there were other really good teams in our district and region. I definitely think it’s kind of shocked the community a little bit.”

As the Warriors reported for practice Monday following Friday’s 41-37 regional final upset over Shaker Heights Laurel, many of the players were still processing what they accomplished.

“It’s been a surreal few days for sure,” West Branch senior guard Peyton Alazaus said. “I don’t think it’s going to sink in for me until we actually get down there and walk onto the court.”

The seniors that carried the Warriors on this year’s run to Columbus were all in middle school the last time West Branch made it to state in 2015 and watched from the stands as the Warriors fell to Toledo Rogers in the semifinal.

“I remember how excited everyone was in the community and how intense the crowd was down there,” Alazaus said.

Bock was on hand in 2015 to watch her sister Lea, who was a starting center for the Warriors.

“I remember drawing my sisters number 44 on my face and wearing my middle school jersey, we were all so excited,” Bock said. “Our community pulled together so much, it was an amazing feeling.”

Bock, who shares the same number and same position as her sister, grew up emulating her game.

“She’s one of my role models,” Bock said. “She was always the post player who rebounded and did a lot of the dirty work. That’s how I am too.”

One of the biggest lessons the current Warriors took from their predecessors was the power of dreaming big.

“Seeing how that team came together and what they accomplished made us want to get a state tournament banner of our own up in the gym,” Alazaus said.”

“I remember sitting in the stands with all the other middle school kids thinking that we wanted to do that someday,” Scarpitti said.

That day has arrived. When the Warriors take the floor at St. John Arena, they will face a Carroll team that is a mirror image in many ways.

The Patriots (23-5) return four starters from last season’s team that lost 56-45 to Toledo Rogers in the Div. II state title game. Much like the Warriors, they are a tough, physical team that wins by grinding down their opponents.

“They’re pretty similar to us,” Scarpitti said. “They aren’t as dominant as Laurel, but they’re really scrappy on both sides of the ball. They have a defense-first mentality just like us.”

“They play hard, they play physical and they really get after you,” DeShields said. “Offensively, they move really well and have some great sets.”

The Patriots finished second in the Greater Catholic League Co-Ed Division, losing the league title to Cincinnati St. Bernard Roger Bacon, whom the Patriots later beat in the regional finals.

The centerpiece for Carroll is 6-0 post Julia Keller, who is averaging 13.7 points, 7.2 rebounds and two blocks per game, while also shooting 36.1 percent from three-point range. The Patriots lost 13-point-per-gam guard Liz Bush to graduation, but 5-5 sophomore Sarah Ochs stepped right into the lineup and was honorable mention All-Ohio, averaging 10.2 points per game and shooting 41 percent from three-point-range. Guard Allie Stefanek (6.7 ppg, 3.5 apg) scored a season-high 18 points in the regional semifinals. Ava Lickliter is a 34 percent three-point shooter and is averaging 2.5 steals per game.

“Trying to stop their big post (Keller) is the top priority, but they also have some pretty good shooters that we need to close out on,” Alazaus said.

While the Warriors have played high-level basketball for much of the season, DeShields said his team has taken it to a whole new level in the last few weeks.

“We’ve really elevated our play as far as execution focus and preparation is concerned on both sides of the ball,” DeShields said. “We’re playing our best basketball in March and that’s what you want.”

A large part of that is due to a collective selflessness that is the hallmark of most successful teams. With such a deep team, tension over roles could have become a problem, but DeShields couldn’t be happier with how his team has bought in and done their jobs.

“I don’t know if everyone was happy with their roles at the beginning, but they ended up falling into them and accepting them. That’s what a great team does,” DeShields said. “They’re playing for each other instead of themselves. This is a team that’s really close and having a lot of fun together.”

¯The Warriors will be playing in front of a much smaller than anticipated crowd after the OHSAA’s decision to restrict spectators for the state basketball and wrestling tournaments. The West Branch players were able to designate four family members to purchase a ticket for today’s game. DeShields said the circumstances have not fundamentally altered the team’s itinerary.

“Our plans haven’t changed,” DeShields said. “We still plan to leave at 5:30 Wednesday, check into the hotel and wake up Thursday ready to win a basketball game.”

¯All 12 girls state tournament will be available to watch live on ohsaa.tv for $9.99 per game. The game are free for Spectrum subscribers.