Warriors battled back from injuries 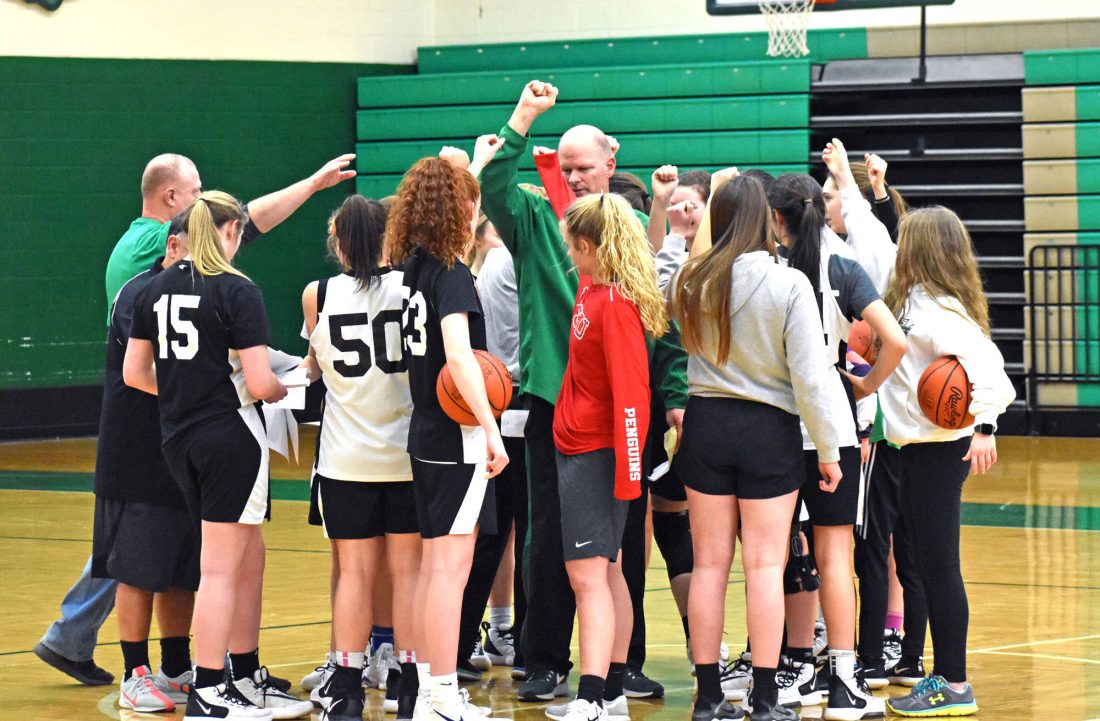 West Branch’s girls basketball team breaks a huddle at practice on Monday. The Warriors will face Dayton Carroll at 1 p.m. on Thursday in a Div. II state semifinal at St. Johns Arena in Columbus. (Photo by Chris Rambo)

BELOIT–The West Branch girls basketball team will enter Thursday’s Div. II state semifinal as a much stronger, deeper team than the version that got bounced in the district semifinals last season.

That’s thanks in large part to the successful return of two keys pieces from major knee injuries.

Senior forwards Hannah Ridgway and Maddie Showalter both went down with torn ACLs last year, but they will both be suiting up when the seventh-ranked Warriors take on Dayton Carroll at 1 p.m. Thursday at Ohio State University’s St. John Arena in Columbus.

Ridgway, who started on West Branch’s top-ranked regional semifinalist as a sophomore, blew out her knee during soccer practice in August of 2018, costing her the entire 2018-19 season. She had to watch as the Warriors met an earlier than accustomed tournament exit.

“It was really hard sitting on the bench watching all season,” Ridgway said. “I knew I could help the team, but obviously I couldn’t do anything about it. Watching us lose to Poland (in the district semifinals) made me really hungry to come back strong. I knew if I worked hard and stayed focused, I’d be able to get back on the court again.”

Showalter stepped into Ridgway’s vacancy in the starting lineup as a junior last season only to go down with her own torn ACL in the sectional final against Howland.

After a grueling rehab, she made her return to the court on January 22 in a 66-19 victory over Alliance.

“My therapist was really pushing me hard because I said I wanted to get back for the last part of the season, it was pretty intense.” Showalter said. “We really buckled down and were able to make it happen.”

Two weeks later, she drew her first start of the season against Austintown Fitch, finishing with 10 points and five rebounds in a 57-29 win.

I’ve been able to improve and get comfortable as much as I can,” Showalter said. “I think I’m peaking at the right time.”

Ridgway persevered through her own lengthy rehab and was able to reclaim her spot in the lineup on opening night against Canfield, finishing with 11 points and eight rebounds in a 50-35 loss.

“I worked for nine months to get back,” Ridgway said. “I had physical therapy all the time, which was a ton of hard work. It took a lot of physical and mental toughness.”

The Warriors couldn’t have asked for much more from Ridgway this season. She is second on the team in scoring and first in rebounding while providing a vital athletic presence in the post.

“My knee has held up pretty well,” Ridgway said. “When I play I really don’t think about it too much.”

The one hiccup came late in the season when an ACL sprain cost her five games down the stretch.

“That was really tough with this being my senior season,” Ridgway said. “But now I’m back, and to be able to help us get to state is just awesome.”

West Branch coach Walt DeShields said the return of Ridgway and Showalter has helped the Warriors elevate to another level.

“We did not have this kind of depth last season,” DeShields said. “If we get in foul trouble or somebody gets a little tired, it helps us play harder. We have a lot of depth in the post, which enables us to play more physical.”

Both Showalter and Ridgway said the experience of making a state tournament run in their final season was more than worth all the exhausting days they fought through to get to this point.

“It’s insane for me to think about,” Showalter said. “I’m just so fortunate to be able to come back and help for the last part of this season.”

“Basketball is my favorite sport and that’s part of what drove me through rehab,” Ridgway said. “This is my favorite team I’ve ever been on and it means so much to be a part of it.”