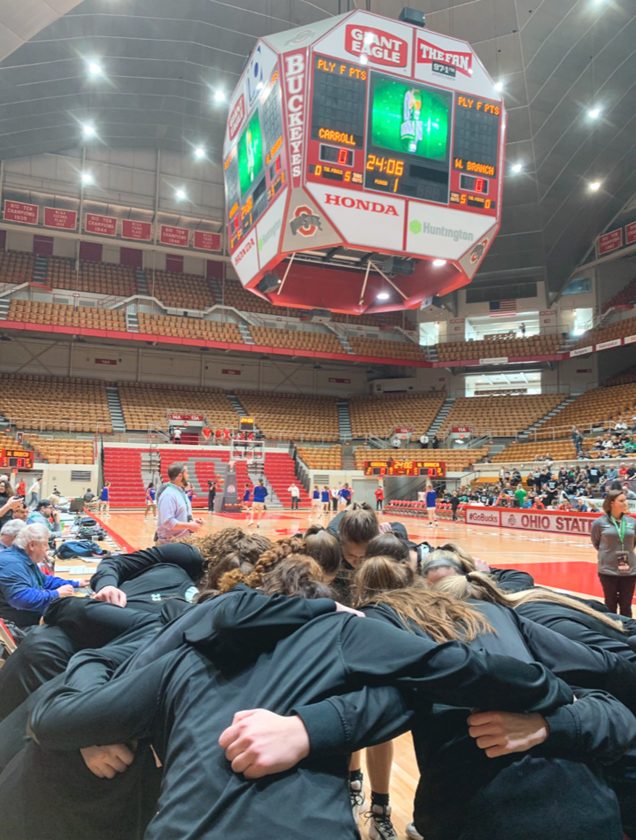 Coach Walt DeShields said this image of the West Branch girls basketball team huddling before the start of its Div. II state semifinal with Dayton Carroll on March 12 at St. John Arena will be one that he’ll remember forever. (Submitted Photo)

An announcement that the West Branch girls team had been bracing for was officially made on Thursday.

In a press release, Ohio High School Athletic Association Executive Director Jerry Snodgrass canceled the remainder of the basketball, wrestling and ice hockey tournaments, which had been indefinitely suspended on March 12 due to the coronavirus COVID-19 pandemic.

West Branch had been just under 16 minutes away from tipping off its Div. II state semifinal against Dayton Carroll on March 12 when they were pulled from the floor at St. John Arena in Columbus and the initial suspension was announced.

Although the Warriors had been expecting Thursday’s news, the sting was still there after their season was officially ended.

“The first reaction is just disappointment,” West Branch girls basketball coach Walt DeShields said. “You work so hard to achieve a goal and you want to get the chance to play. But the further removed you got from the tournament, the less likely it seemed. It’s an announcement we were all kind of expecting. It gives us some closure.”

DeShields broke the news to the team in a group chat before the OHSAA released its official statement.

“I wanted to give them all a heads up before it became public,” DeShields said. “We then took some time to exchange some of our favorite memories from the season together.”

They had plenty to reminisce about. From their perfect run through the Eastern Buckeye Conference, to their nail-biting district final victory over Poland, to their regional championship upset over Shaker Heights Laurel, the Warriors gave themselves and their fans quite a ride.

“On a day like today, you just reflect on the journey you went through together,” DeShields said. “Starting all the way back in the summer and into the fall, it’s a team that came to work every day and kept getting improving. That last game against Laurel represented everything this group was about. We were up against a team that some people considered the best in the state, but we put everything together that night.”

DeShields said the team hoped to do something special to commemorate its season when they are allowed to gather together again.

“We haven’t discussed anything yet, but I’m sure we’ll do something,” DeShields said. “It’s important that these girls receive some recognition for all they accomplished. I know the OHSAA has talked about doing something special for them as well.”

Although the Warriors never got the chance to compete for a state title, they did provide DeShields with one final lasting memory before everything was halted.

“Before every game, the team huddles with each other for a pep talk before warming up,” DeShields said. “We have a panoramic shot of them huddling together on the floor of St. John Arena with the scoreboard in the background, it’s an image I’m going to remember forever. Even though they didn’t get to play the game, it’s every team’s goal to be able to run onto the court at state and they were able to accomplish that. It’s something nobody is going to be able to take away from them.”

• With schools closed, spring sports are still on hold.

• These four winter state tournaments and a few events during World War 2 (1941-45) are the only sports cancellations in the history of the OHSAA, which was founded in 1907.

• No state champions will be listed for these four sports in 2020. The OHSAA does not use state polls from the media or coaches associations to determine state champions.