Coaches work to give players a chance 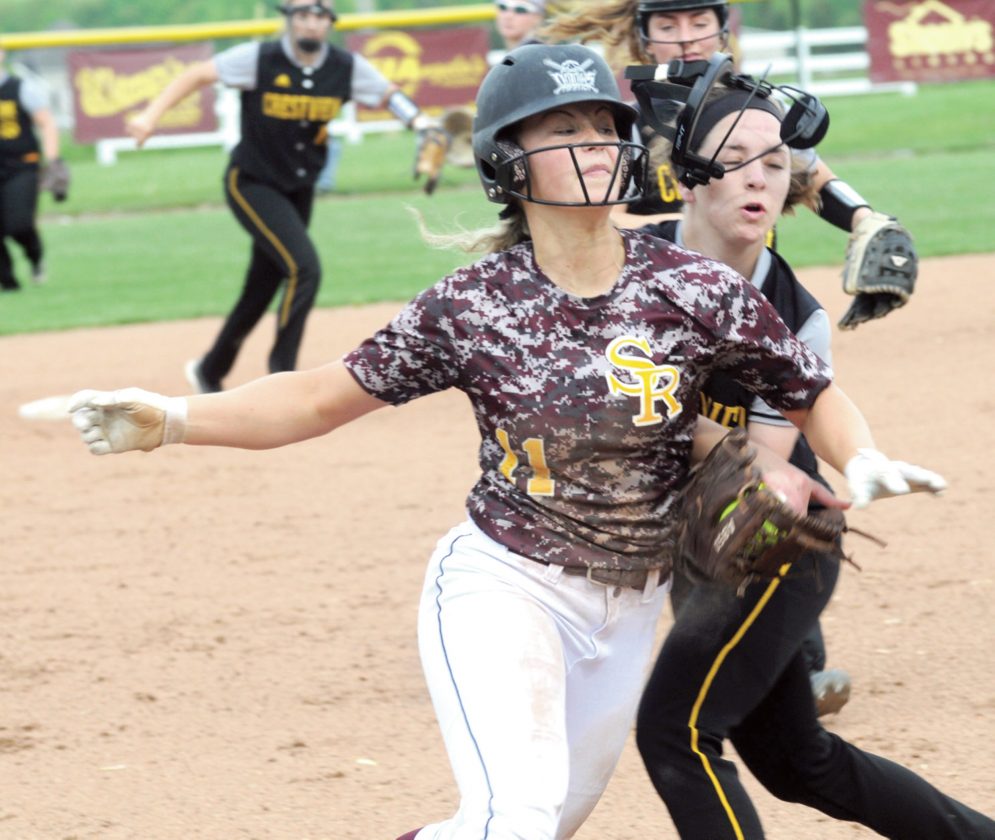 South Range’s Bree Kohler is tagged out by Crestview shortstop Haley Eskra during a rundown during the Division III district final on May 16, 2019. (Morning Journal/Chris Rambo)

It was a hard pill to swallow for area softball teams.

“We had hope when the governor said things would be closed through the end of April and the Ohio High School Athletic Association came out with a revised schedule,” South Range coach Jeff DeRose said. “Weighing on the side of being cautious the governor pulled the plug and in the back of our minds we knew it was going to happen, but until you see it in writing it didn’t hit home. When I did see it, I’m going to be honest with you, a tear did come down my face.”

DeRose said the players were emotional about it as well in texts and phone calls. It was a scene repeated by many teams in the wake of spring sports being canceled in the state of Ohio last Monday.

Crestview was gearing up to be one of the most prominent teams in Columbiana County this season. DeRose thought the Rebels would be in the mix with the Raiders for the Div. III district title. The two teams played a classic district final last May when the Rebels managed to score three runs with two outs in the top of the sixth to tie the game. South Range came back in the bottom of the sixth to score the winning run in the 4-3 victory.

“We had a lot of momentum going into this year,” Crestview coach Greg Eskra said. “We were so close last year and my kids were definitely focused. Last year was the best season Crestview has ever had going 22-8. We won the OVAC. We really did believe it would be us and South Range again.”

The Rebels, of course, are in the same league as three-time defending Div. III state title holders Champion. They would have met two times during this regular season and those are games that girls look forward to because of the challenge according to Eskra.

“It’s sad for those (Champion) girls too,” Eskra said. “I don’t think anyone has won four state titles in-a-row and I would say they’re unstoppable. They have a great team and a great coach.”

South Range’s season came to an end with a 14-0 loss to Champion in the regional semifinals last season and the Raiders were using that as motivation for this season. They were likely to be in the mix with area softball powerhouse Poland for the Northeast 8 title as well.

DeRose and Eskra describe themselves as good friends and as the likelihood of a canceled season was seeming more likely they were in discussions to put something in place to make sure the seniors get to play at least one more time if conditions allow in the summer.

“I brought up the idea of doing a senior game between South Range and Crestview if we were allowed in June or July,” Eskra said. “The more we talked, we thought why not try to do a senior all-star game for all the teams in the Northeast 8 and All-American Conference. Perhaps we could do a doubleheader on a weekend and give the girls a chance to play. We’d have enough seniors to field four teams. We’d make a day of it, have food and maybe get them a T-shirt. We want to give them one last opportunity to play high school softball.”

Salem head coach Mike Thorpe was pouncing on a similar idea when it was apparent the season was canceled. The Ohio High School Athletic Association allows for 10 days of coaching instruction in the summer for high school softball and he hit Facebook to put out feelers for area teams who might be willing to play exhibitions in the summer. He said the idea developed from something schools in Pennsylvania were doing. The challenge will be getting clearance from the governor to play and organizing the event around travel ball if it is being played.

“I think the girls need to leave on their own terms if they get that chance,” Thorpe said. “We want to do something for the girls if we can.”

Thorpe said one of the toughest things about the cancelation of the season was the elimination of the team’s annual trip to Pigeon Forge, Tennessee. The trip traditionally started with an arrival on Easter Sunday and allowed for things like hiking in the woods and entertainment in Gatlinburg.

“We used to joke, softball was the excuse to go on the Tennessee trip,” Thorpe said. “We love playing in that event, but it’s more about each other.”

Veteran softball coach Dan McKinstry, who is also the head volleyball coach at Wellsville High School, was looking forward to his first season in charge at Springfield Local after many years at East Palestine.

“After three weeks of practice I felt we were really starting to come together,” McKinstry said. “They were understanding me and I was learning who they were.”

McKinstry admits he was inheriting a young team and that the lack of play this season could mean for more challenging times down the road, especially if summer leagues also do not play.

“If that’s the case then next year we will have had two kids who have played in a high school softball game,” McKinstry said.

McKinstry said he was open to Thorpe’s idea of playing exhibitions during the summer and he told his players to keep that in mind as it would try to work around potential travel ball schedules. McKinstry did stress though that the serious reality of the COVID-19 pandemic might not allow for the best intentions to take shape.

“Look, I have not seen my grandkids in person since Christmas,” McKinstry said. “I know a lot of people are in a similar boat with the way things are. It’s a tough situation.”