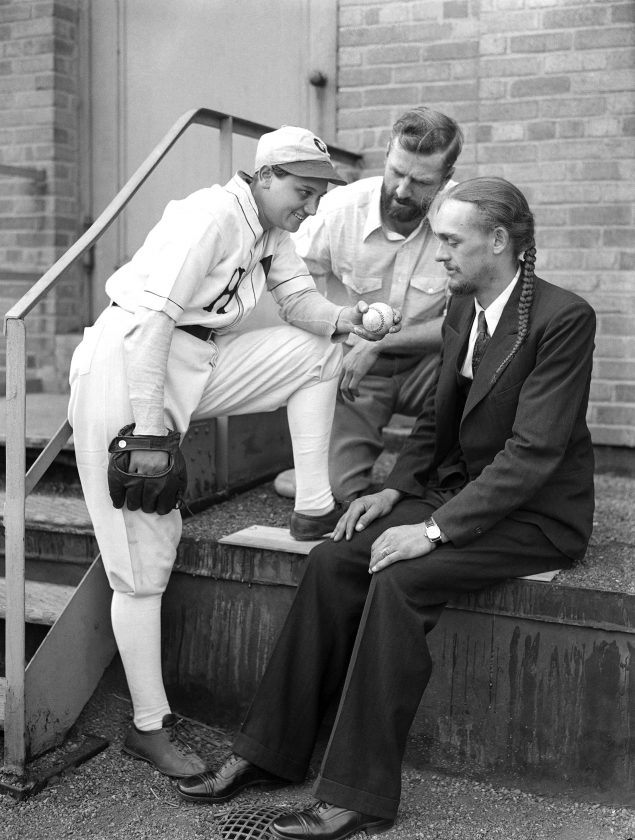 19-year-old Jackie Mitchell, left, of the House of David baseball team, speaks to her teammates, Harry Lauper, center and an unidentified player, while in New York, July 14, 1933. Mitchell, who gained fame by striking out Babe Ruth and Lou Gehrig in 1931, played at least one game in Columbiana County in her short career as a sideshow attraction. (AP Photo)

On Jan. 24, 1958, The House of David faced off against the Harlem Globetrotters in an exhibition basketball game at Memorial gymnasium in East Liverpool.

Essentially two of the same thing, but in different times and from different disciplines the Globetrotters won the game in front of 1,600 fans with Stan “Chico” Burrell scoring 20 points.

By 1958, The House of David phenomenon was on its last legs. It started as a religious commune in Benton Harbor, Michigan in 1903 and by 1915 fielded traveling baseball teams.

But these weren’t ordinary baseball teams.

The House of David played these games in long hair and long beards but with the sort of flashy skill that would later make the Globetrotters a household name in basketball.

Basically The House of David invented “pepper” games and the organization was highly successful wherever it went.

Columbiana County and surrounding areas saw their fair share of The House of David over the years.

In 1931, shortly after The House of David started hiring professional stars to play, a team led by Grover Cleveland Alexander faced a Homer Laughlin China team at Clarke Field in Newell.

In June 1946, The House of David claimed to have played its first game since the attack on Pearl Harbor against a local team at Patterson Field in East Liverpool.

Spin-off teams also happened. A House of David Negro Nine, said to be the most entertaining version of all House of David teams, played games (in beards) around Columbiana County in the late 1930s.

Even though The House of David was more known for its baseball excellence, it did branch off into basketball into the 1930s.

Around 1932 House of David basketball teams started showing up on a regular basis.

House of David made its basketball debut in Salem on Jan. 16 playing the Foremen’s club of Mullin’s Manufacturing. A House of David basketball game was also played in East Liverpoool later that year.

In 1951, East Palestine saw a version of House of David play the Harlem Aces, a likely rip-off of the Harlem Globetrotters.

In 1931, 17-year-old Jackie Mitchell, then playing for the Chattanooga Lookouts, was called on to pitch in relief in an exhibition game against the New York Yankees. The batters that stood before her were Babe Ruth and Lou Gehrig.

She struck both batters out and cemented herself into baseball lore.

To continue to play the game, Mitchell had to resort to playing for House of David travelling squads.

On June 16, 1937, she pitched in an exhibition game at Lake Placentia in Columbiana County as a member of the Hawaiian Hulu traveling team. She didn’t have the greatest of nights but the Hawaiians came out on top 23-15 against a team of locals in a game played under the lights.

Later in 1937 tiring of being a sideshow, Mitchell retired from baseball. She later resisted joining the All-American Girls Professional Baseball League during the war.