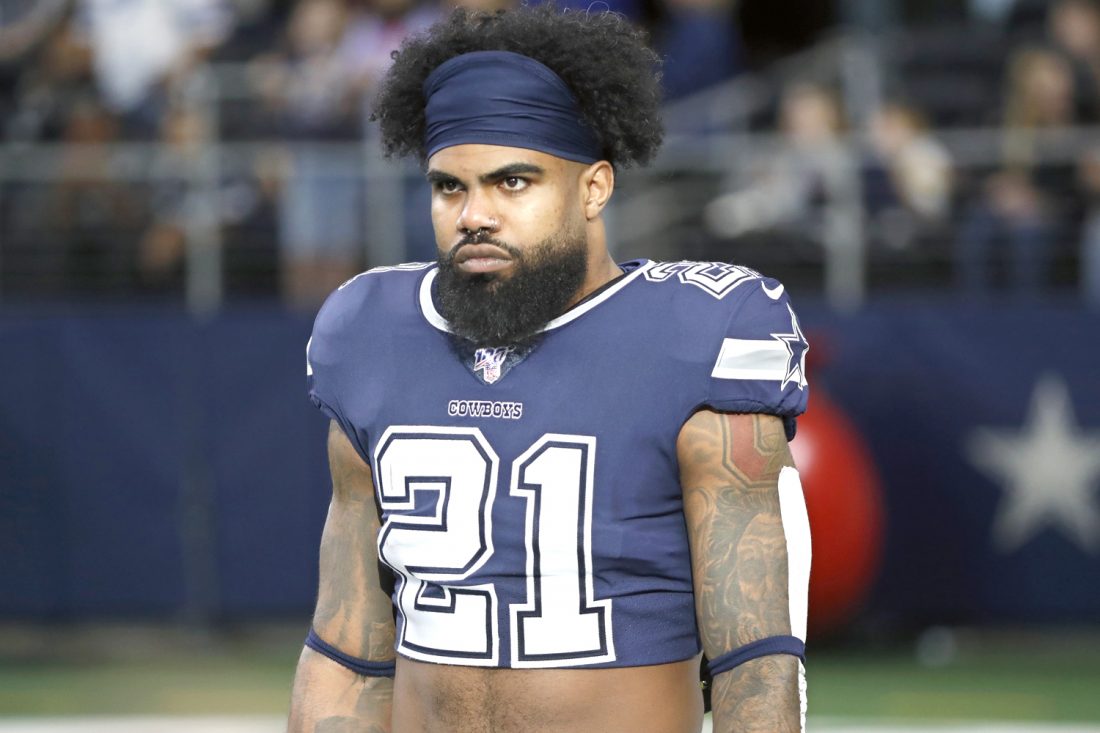 FILE - In this Dec. 15, 2019, file photo, Dallas Cowboys running back Ezekiel Elliott (21) warms up before an NFL football game against the Los Angeles Rams in Arlington, Texas. Ezekiel Elliott tested positive for the coronavirus, according to his agent. Rocky Arceneaux told the NFL Network on Monday, June 15, 2020, that Elliott was feeling OK and recovering.(AP Photo/Roger Steinman, FIle)

Dallas Cowboys running back Ezekiel Elliott has tested positive for the coronavirus, according to his agent. Rocky Arceneaux told the NFL Network on Monday that Elliott was feeling OK and recovering. Arceneaux did not immediately return messages seeking comment, but a person with direct knowledge of the diagnosis told The Associated Press that Elliott had the positive test about a week ago and could be described as symptomatic. The Cowboys declined to comment, citing privacy laws.Only players who have been rehabilitating injuries have been allowed inside team facilities during the pandemic shutdown. That hasn’t included Elliott.

WNBA plans to play in Florida

NEW YORK — The WNBA on Monday announced plans to play a reduced season, with a 22-game schedule that would begin in late July without fans in attendance because of the coronavirus pandemic. The league is still finalizing a partnership with IMG Academy in Florida to play all the games at the facility in Bradenton or other nearby locations. Players and team officials for the league’s 12 teams would be housed at IMG and hold training camps there. “There’s a lot to do between now and the tip of the season, now that we’ve selected IMG Academy” as the location to play, WNBA Commissioner Cathy Engelbert said. “My hope is the July 24 date will stick. We have scenarios and plans to lift and shift the tip of the season. It could slip to a couple of days later. We want to have the appropriate number of days for training camp.” The WNBA would use its regular playoff format, with the top eight teams making the postseason and the first two rounds being single-elimination. The top two seeds would have byes until the semifinals. The playoffs would begin in the middle of September and end in early October. Teams would play each other twice in the abbreviated 22-game schedule, which the league said would be released later. The IMG facility has four courts, but the WNBA is still exploring options to play games at other sites in the area just south of Tampa/St. Petersburg that might be better for broadcasts.

ATLANTA — New Orleans Saints safety Malcolm Jenkins will join CNN as a contributor focusing on racial and social justice. “I believe I can be a voice for other athlete activists and those who have dedicated their lives to changing legislation, policies and reforms for human equality,” Jenkins said, touting his experience addressing “the inequalities of our criminal justice system, educational system and disparate wealth in our marginalized communities” during his 11-year NFL career.

OKLAHOMA CITY — Star Oklahoma State running back Chuba Hubbard suggested Monday he may boycott the program after coach Mike Gundy was photographed wearing a T-shirt displaying the One America News Network, a far-right news channel that has been praised by President Donald Trump. Gundy is seen in a photograph on Twitter wearing the shirt with the letters OAN. In a tweet responding to the photo, Hubbard said: “I will not stand for this. This is completely insensitive to everything going on in society, and it’s unacceptable. I will not be doing anything with Oklahoma State until things CHANGE.” Several current and former Oklahoma State athletes responded to Hubbard’s tweet with support.

LAS VEGAS — The Vegas Golden Knights signed tough guy (and ex-Penguin) Ryan Reaves on Monday to a two-year contract extension worth $3.5 million. He’ll count $1.75 million against the salary cap in each of the next two seasons. “There’s two things I haven’t accomplished: No. 1 haven’t won a Stanley Cup, No. 2 haven’t won a scoring title,” Reaves said. “Now, I can win a Stanley Cup this year. I can do it. Can’t win the scoring title. Can’t do it. Just missed it by a couple points. And I also can’t do it next year if I don’t have a contract. So I am happy to announce that I just signed a two-year extension with your Vegas Golden Knights.” The 33-year-old from Winnipeg had eight goals and seven assists for 15 points — 95 short of Leon Draisaitl’s league-leading 110. Reaves did lead the NHL with 316 hits in 71 games this season.

Brooklyn Nets forward Kevin Durant has joined the ownership group of Major League Soccer’s Philadelphia Union. Durant, a 10-time NBA All-Star, has a 5% ownership stake, with an option for 5% more in the near future, the Union announced Monday. “I’ve always been a soccer fan and have wanted to get into it in a meaningful way. My team and I felt an instant connection with the Philadelphia Union ownership and staff and their vision for a partnership,” Durant said in a statement. “While you won’t get to see me at games for now, my team and I will be taking an active role in the community where I can help give back to Chester (Pennsylvania) and Philadelphia.”

NEW YORK — Major League Baseball has delayed the start of the new international signings period from July 2 until Jan. 15, a move that will cause teams to push back deals for 16- and 17-year-old Latin American prospects. MLB said the current signings year, scheduled to end Monday, had been extended until 5 p.m. EDT on Oct. 15. There has been a transaction freeze since March 28, and any agreements between the end of the freeze and Oct. 15 will count for the 2019-20 signings year.

UT leader to meet with students

AUSTIN, Texas — The interim president of the University of Texas said Monday he is scheduling meetings with student groups after dozens of Longhorns athletes said they wanted the school to ditch “The Eyes of Texas” song and rename several campus buildings. The athletes said last week they won’t help the school recruit future athletes and won’t participate in alumni events as they typically do. They said they will continue with team activities leading up to the fall semester, but didn’t say what they will do once school starts. “I have heard from many students, alumni, faculty and staff asking for meaningful changes to promote diversity and equity and ensure that black students at UT are fully supported. It is important, first, for me to listen closely — and then to work with the entire community to develop a plan to move the university forward,” interim president Jay Hartzell said in a statement. The statement did not address any of the specific issues raised by the students, who issued their demands after the death of George Floyd in Minneapolis led to massive protests against racial injustice and police brutality.

INDIANAPOLIS — The Indianapolis Colts will add career sacks leader Robert Mathis to their Ring of Honor this year. The team announced Monday the induction ceremony will take place Nov. 22 when the Colts host the Green Bay Packers. Mathis played his entire 14-season NFL career in Indianapolis and was best known for his chop to jar balls loose from quarterbacks. He finished his career with a franchise-record 123 sacks, 17th all-time, and a league-record 47 strip sacks. He was the inaugural Deacon Jones Award winner in 2013 and was named an All-Pro that season after leading the NFL with 19 1/2 sacks. “From a fifth-round pick from a small college to one of the most effective and feared defensive players in the NFL, Robert Mathis was a centerpiece of the historic Colts teams of the last two decades,” Colts owner Jim Irsay said in a statement. “He was undersized and underrated, but he made up for it with a motor that wouldn’t quit and a flawless technique that outmatched the most talented lineman in the league. And to watch him strip-sack the quarterback — which he did better and more than anyone in NFL history — was a thing of beauty.” Mathis was selected to six Pro Bowls. He won two AFC titles, earned one Super Bowl ring and was selected the team’s 2011 Ed Block Courage Award. Mathis, who played his college ball at Alabama A&M, retired following the 2016 season but returned to the Colts as a consultant and assistant coach. He will be the 17th inductee.

MORGANTOWN — A football player at West Virginia has tested positive for the coronavirus, the school said Monday on the first day of voluntary workouts. Both the player who tested positive and the others he may have been in contact with will isolate themselves for 14 days. Voluntary workouts will continue for players who have tested negative for the virus. When West Virginia begins its fall semester on Aug. 19, students must wear masks on campus, including in class. Students, faculty and staff must be tested for the virus before they return to campus and complete a coronavirus education course.

WEST LAFAYETTE, Ind. — Morgan Burke, the longest serving athletic director in Purdue history, died at his home Monday after battling a rare disease for the past year. He was 68. University officials said in a statement Burke had been diagnosed with amyloidosis, an ailment caused by the build-up of an abnormal protein which prevents the body’s organs from functioning properly. Burke took over as athletic director in 1993 and held the title until he was named the university’s vice president for special projects in 2016.