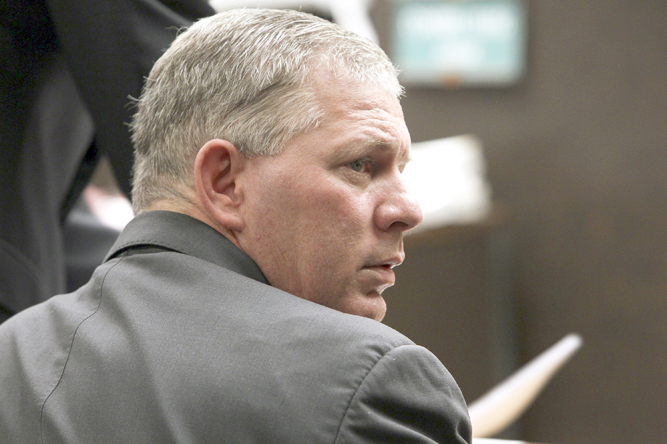 Lenny Dykstra is seen during his sentencing for grand theft auto in Los Angeles in 2012. (AP photo by Nick Ut)

NEW YORK — A judge has dismissed Lenny Dykstra’s defamation lawsuit against former New York Mets teammate Ron Darling, ruling the outfielder’s reputation already was so tarnished it could not be damaged more.

Dykstra claimed he was defamed when Darling alleged he had made racist remarks toward Boston pitcher Oil Can Boyd during the 1986 World Series. Justice Robert D. Kalish in New York Supreme Court in Manhattan did not evaluate whether the remarks occurred.

“It is only to say that Dykstra’s reputation for unsportsmanlike conduct and bigotry is already so tarnished that it cannot be further injured by the reference,” Kalish said in a decision issued Friday.

Dykstra filed the suit in April 2019 against Darling, St, Martin’s Press and Macmillan Publishing Group, then added Daniel Paisner as a defendant last September. Dykstra’s suit followed the publication of Darling’s book, “108 Stitches: Loose Threads, Ripping Yarns, and the Darndest Characters from My Time in the Game” by St. Martin’s Press, which is part of Macmillan. Dykstra alleged defamation and intentional infliction of emotional distress.

Darling wrote Dykstra was “one of baseball’s all-time thugs” and was in the on-deck circle at Boston’s Fenway Park before Game 3 of the 1986 World Series while Boyd warmed up and was “shouting every imaginable and unimaginable insult and expletive in his direction — foul, racist, hateful, hurtful stuff.” Darling called it “the worst collection of taunts and insults I’d ever heard — worse, I’m betting, than anything Jackie Robinson might have heard, his first couple times around the league.”

Dykstra was sentenced eight years ago to prison on both federal and California state charges.

“Based on the papers submitted on this motion, prior to the publication of the book, Dykstra was infamous for being, among other things, racist, misogynist, and anti-gay, as well as a sexual predator, a drug-abuser, a thief, and an embezzler,” Kalish wrote.

“The nature and seriousness of Dykstra’s criminal offenses, which include fraud, embezzlement, grand theft, and lewd conduct and assault with a deadly weapon, and notably the degree of publicity they received, have already established his general bad reputation for fairness and decency far worse than the alleged racially charged bench-jockeying in the reference could,” the judge wrote.

Kalish dismissed the second count as duplicating the defamation allegation.

Darling issued a statement thanking his agent, lawyers and the networks that employ him, along with family friends and colleagues. “With this behind me, I will have nothing more to say about this matter,” he said.

St. Martin’s said in a statement it “is obviously very pleased with the judge’s decision.” Dykstra declined comment.

The judge also said “given Dykstra’s celebrity and apparent attraction to the spotlight, Dykstra’s remedy lies in telling his own story to the public.”

“This court sees no legal basis for why it should use its very limited time and resources litigating whether Dykstra engaged in yet another example of bigoted behavior over 33 years ago in a court of law,” Kalish wrote. “There are sports commentators, bloggers and legions of baseball fans to litigate this issue in a public space. This court, however, has cases involving lost livelihoods, damaged and lost lives, as well as plaintiffs that have suffered very real reputational injuries.”