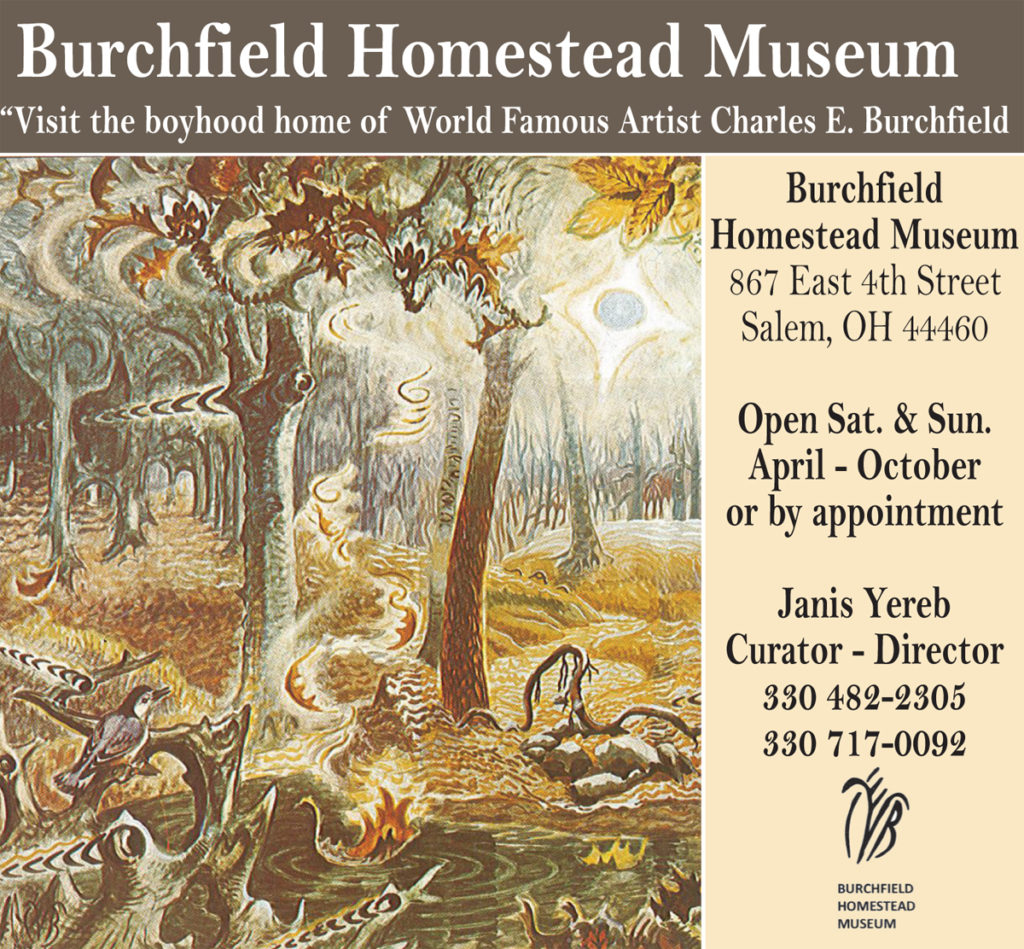 Located in the childhood home of Salem’s world famous artist Charles E. Burchfield at 867 E. 4th St., the Burchfield Homestead Museum, is celebrating October as “Fire and Flames” month. The museum has placed on special display a dozen prints “no one in Salem has seen before,” said Janis Yereb, director-curator of the Burchfield Homestead Museum. This scene is a part of the “Autumnal Fantasy” that Burchfield continually worked on from 1917 to 1944. (Contributed photo)

SALEM — Charles E. Burchfield called 1917 his golden year in his painting career. It’s the year he was most productive.

Burchfield historians said his golden years began late in the summer of 1915 after he finished course work at the Cleveland School of Art before returning to Salem in what he labeled “the golden country.”

The Burchfield Homestead located at 867 E. 4th St. was the boyhood home of Charles E. Burchfield, a world famous artist, and is listed on the National Register of Historic Places.

Burchfield was noted for his paintings of scenes in and around the house and most of his early works were done at this house, where he lived from the age of five to 28.

Janis Yereb, director-curator of the Burchfield Homestead Museum, said the museum is open Saturday and Sunday from April to October or by appointment.

October is fire and flames month at the museum, Yereb said.

“We have a dozen prints no one in Salem has seen before,” she said, adding she gleans them from 50 to 60 year-old catalogs.

She invited everyone to “visit his boyhood home” which is celebrating Autumnal Fantasy which was a long-time, ongoing work-in-progress nature scene Burchfield pieced together using Painter Road scenery.

Born in Ashtabula Harbor in 1893, one of six children, Burchfield was raised by his widowed mother in Salem, her hometown, and was a 1911 Salem High School graduate.

A veteran, Burchfield was assigned to the camouflage unit of the U.S. Army in 1918.

At the time Salem was a thriving industrial community of 9,000 people, with a lively downtown, plenty of architecture, public transportation which enjoyed rich rural surroundings of woodlands, streams and marshlands, all of which he observed and articulated in his paintings.

Yereb said his gift was “his ability to translate what he saw around him — looking out windows or from the back yard at his treasured fourth Street home — into words, and then into the most unique, energetic, emotional and sensory visual art.

“Initially, his decorative vocabulary led him to believe he would find a career in writing. His drawings were immature and copies.”

Yereb explained it was the Cleveland School of Art that taught him skills and “he began using his explosive imagination and developing his skills in 1915.”

Burchfield became “more serious” when “recording personal reactions to nature and to drawing and painting doors,” she said, explaining that at time Burchfield worked realistically to get a “feel” for the subject and ultimately he “developed his decorative details with freedom and contrasts.”

She continued, “He created stylized swirls and energetic patterns of twisting forms. He experimented with the power of dislocations and noisy abstractions of sizes in scale.”

Burchfield came up with the term “conventions in abstract thinking” for a series of graphic symbols he invented.

Yereb said, “His purpose in creating recognizable images to associate with emotional and sensory perceptions, was key to understanding his visual language.”

She added, “The imagery and style in his work appeared around 1916. His concept about his work did not change throughout his career. Everything that he experienced and invented in Salem remained in his works.

“His skills developed. The layering of images grew. The details became designs. His focus was solid; his sunflower painting binge of 1916 launched the more than 400 works created.”

Burchfield never ceased the process of absorbing and reinventing nature and a body of more than 5,000 paintings is proof that “he is among the most, if not the most creatively productive, imaginative, inventive, intense visual poets of the 20th century,” Yereb states.

Beginning in November, the Burchfield Homestead Museum will see seven tour busloads and is looking forward to the “Trains and Trees” event at the museum and at the Naragon Law Office on E. State St. on Nov. 18-19.

Lions clubs activities LISBON - All Lions clubs in District OH-4 have canceled all meetings, fundraising and ...

LISBON — The postponed March 17 primary election has been moved to April 28 by the state legislature, and this ... 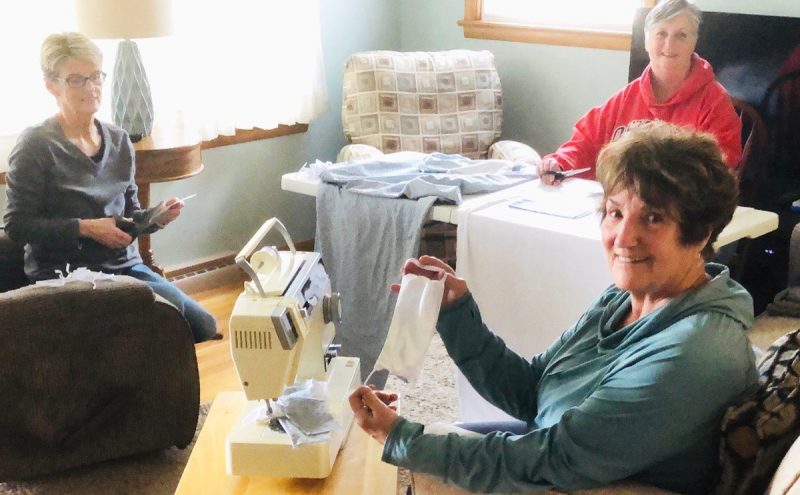 SALEM — As part of its preparedness planning to fight the coronavirus, Salem Regional Medical Center is adjusting ...

LISBON — When Police Chief Mike Abraham returned on Monday from a scheduled vacation, he was surprised at what ...