Salem teen to travel to college in style 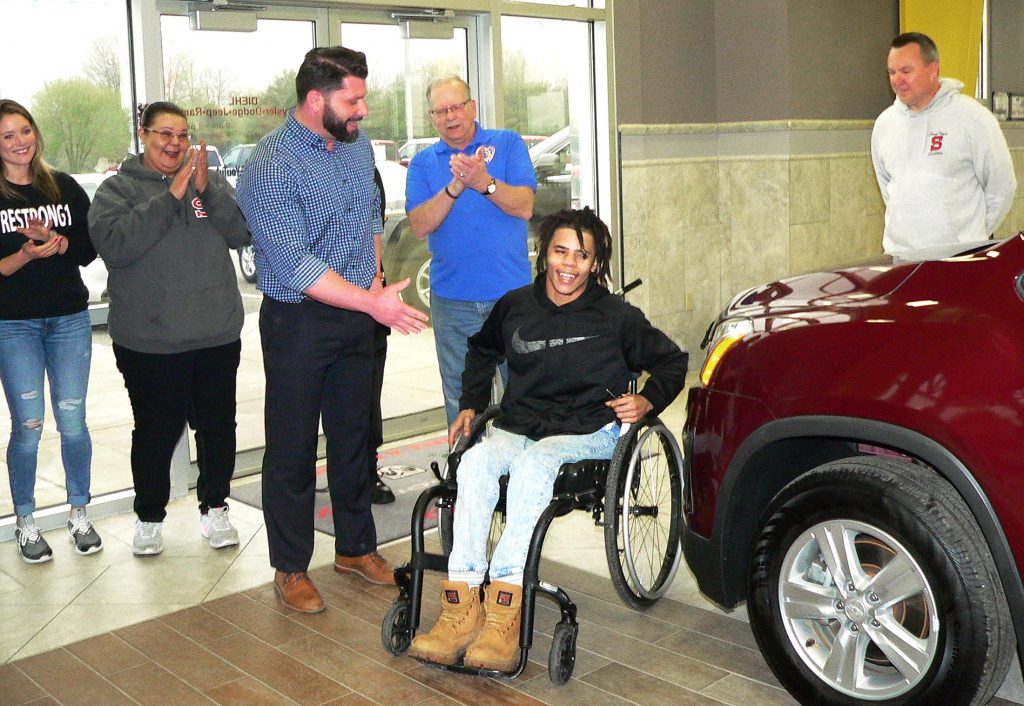 Salem High School senior Tre Williams smiles broadly after Diehl of Salem general sales manager Bryan Albert hands him the keys to his independence, a 2016 Chevrolet Trax, as his mom, Rebecca Young, second from left, and Salem High School Principal Sean Kirkland, right, look on Saturday morning. Holy Trinity Lutheran Church, Salem schools, his fellow seniors and the community all chipped in through donations and fundraisers to provide the paralyzed 18-year-old with a vehicle he can drive. Diehl gave them a break on the price and will provide basic maintenance, such as oil changes, fluid fill-ups and tire rotations for the next two years at no cost. This summer, Williams will leave for his first year at Ohio State’s Agricultural Technical Institute in Wooster where he’ll major in horticulture. (Salem News photo by Mary Ann Greier)

SALEM — Tre Williams’ dream of independence came in a set of keys Saturday — keys that started up a 2016 Chevrolet Trax to be equipped with permanent hand controls so the paralyzed teen can drive himself to wherever he needs to go, including college.

“This is a long time coming,” the 18-year-old Salem High School senior said with a smile.

Two years ago this month, Williams was a back seat passenger in a vehicle when a life-changing accident occurred, leaving him with a spinal cord injury and the realization that he was paralyzed. As he worked on getting used to life in a wheelchair, he started setting goals and one of those goals was to go to college.

His church family at Holy Trinity Lutheran Church asked if he could have anything, what would he want. Williams wanted a way to be independent.

What better way for a teen to gain independence for the trip to adulthood and college than with a car? That’s what the church members decided, formed a committee and worked with Salem City Schools to raise the funds.

With donations by the senior class, church members, the school community and the community at large and a spaghetti fundraiser, they met their goal and went shopping. Salem High School Principal Sean Kirkland, who’s already been tapped as the next superintendent, contacted the Diehl of Salem dealership, told general sales manager Bryan Albert what they had in mind, and he got back to him the same day.

Kirkland took Williams out of class one day last week so they could see the vehicle. Williams used his temporary hand controls to take the vehicle for a test drive with Kirkland and Diehl gave the committee a break on the price, actually taking a loss on the sale. The purchase price was $14,000 for the SUV with just 21,000 miles on the odometer, a 151-point inspection completed, all-wheel drive, new tires, even some body work done. Diehl also offered two years of general maintenance, such as oil changes, tire rotations and fluid fill-ups, at no cost. The committee also had enough to cover the insurance for at least a year.

Now that he has the vehicle, he can have the permanent hand controls installed to control the gas and brake pedals.

He’ll be graduating with the rest of his class at the end of this month, then come August, he’ll be a freshman living on campus and majoring in horticulture at Ohio State University Agricultural Technical Institute in Wooster.

“I’m really excited for Tre. I’m proud to be from Salem, Ohio. The community, his classmates came together for him in a way that just makes your heart warm. I know Tre appreciates the hard work that everybody’s put into this,” Kirkland said.

Amie Cochran, who headed up the committee at Holy Trinity and is a teacher, thanked Diehl for coming up with a great deal during a ceremony held at the dealership to turn over the SUV, attended by church members, school officials, students and family members. She said “Tre is very special in our hearts.”

She was proud of the Holy Trinity members for supporting Tre, who’s been attending the church since childhood. She said he’s one of theirs and they want the best for him. His mom, Rebecca Young, was amazed at all the support and said “the community is awesome.”

Diehl is owned by Corina and Matt Diehl and Albert said they’re very active in all the communities where they have dealerships. When the opportunity presented itself, he said they were more than happy to help.

“Giving back to the community at the end of the day is what it’s all about,” he said.