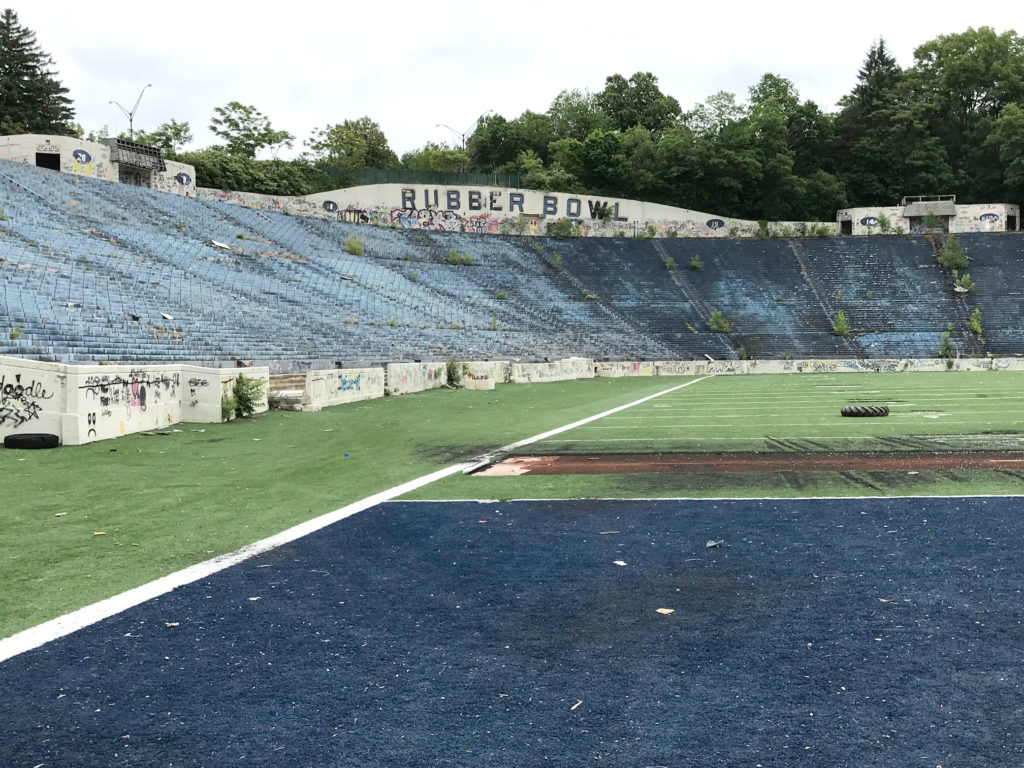 In this June 6, 2018 photo, the closed end of abandoned Akron Rubber Bowl stadium is pictured in Akron, Ohio. Part of the historic stadium is being torn down starting next week because itÕs a public health hazard. (AP Photo/Mitch Stacy)

AKRON (AP) — Billy Graham saved souls there. Karl Wallenda once walked on a tightrope above the gridiron. The Rolling Stones performed there in 1972, getting fans so worked up that a couple dozen got arrested. And there was football. Lots of football.

In the end, the Akron Rubber Bowl’s splendid past couldn’t save it from the wrecking ball. Allowed in recent decades to crumble into a public health hazard, the landmark 78-year-old stadium will start to come down next week.

Like the booming local tire industry that inspired its name, the Rubber Bowl once stood as a shining source of civic pride in the modestly sized Rust Belt city that lived in the shadow of larger Cleveland — with its pro teams and 80,000-seat stadium — to the north.

To Akron, the Rubber Bowl was a huge deal.

“This dream that Akronites have cherished has come true,” the Beacon Journal newspaper effused when the venue opened in 1940, the product of a public works project during the Depression.

“You may have heard, folks, that I spent the summer with our men all over the Pacific,” the entertainer told the somber crowd. “And I want to tell you that this bowl is a picture of the kind of America those kids dream about.”

The Cleveland Browns played some preseason exhibition games. The short-lived Cleveland Rams battled the Pittsburgh Steelers in the Rubber Bowl mud in 1941, and the Dallas Texans got the only win in their one-season history over George Halas’ Chicago Bears there on Thanksgiving 1952.

Concert tours brought Three Dog Night, the Osmond Brothers, Simon and Garfunkel, Van Halen and the Grateful Dead. Rocks and bottles were thrown at police trying to make a drug arrest at the Rolling Stones show in July 1972. Seven officers were hurt in the skirmish and 27 concertgoers were arrested.

Wallenda, the famous aerialist, eased across a wire 70 feet overhead before a 1973 University of Akron game while the marching band played circus music. Halfway across, he stopped and stood on his head.

“We were in the locker room and I told our coaches, this game is very important, but we’ve got a guy out there here walking across on a wire,” recalled Jim Dennison, who was Akron’s head football coach at the time. “I’m going to go watch it. You guys take over here.”

The Zips from the University of Akron played at the Rubber Bowl from 1940 until 2009, when they moved to the new InfoCision Stadium on campus. The old venue changed hands to private owners whose plans to revive it for one use or another never materialized.

The city of Akron, which took ownership again after a bank foreclosure, said this week it will begin “emergency demolition” because the condemned edifice is a risk to the adjacent Derby Downs, home of the famous International Soap Box Derby. There are no immediate plans for the site.

“It really served the community well over the years,” said 83-year-old Ken MacDonald, an Akron native who was sports information director at the university from 1965 to 1989.

“I am so glad they’re tearing it down, though,” he added. “It outlived its usefulness. It’s just ugly. It’s been dead for a long while.”

In fact, the Rubber Bowl had been crumbling since before the university football team played its last game there in 2008. Some of the seating sections were closed because they were deemed unsafe. Dennison said the university had to pump sand and concrete into the ground every offseason for years so a spring wouldn’t bubble up under the closed end.

As a demotion crew did prep work this week, cars pulled up so people could took a last look and get some pictures. Among them was Craig Orcutt, a 64-year-old Akron native who attended the university in the 1970s.

“It’s sad,” said a wistful Orcutt, who was in town from Atlanta for a college reunion. “It’s just a bit of history that’s gone for a lot of people.”