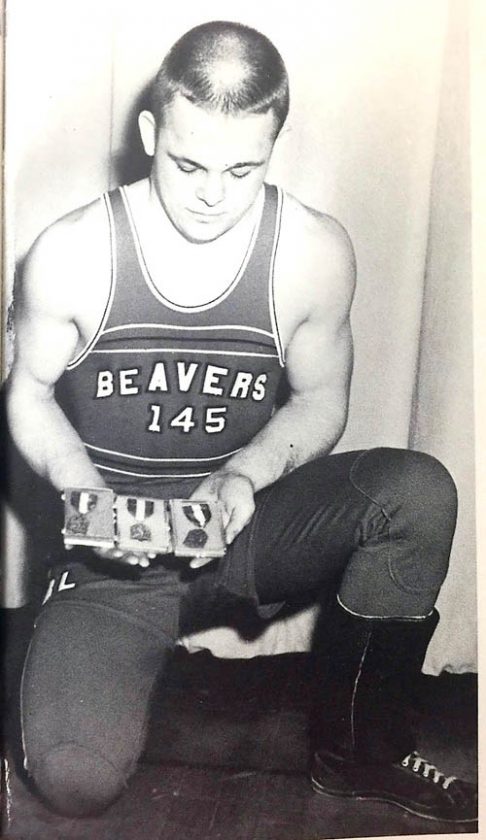 CALCUTTA –As the years have gone by, the tradition-rich Beaver Local wrestling program has become accustomed to chasing excellence. The benchmark for those high standards was set by Carl Hoppel.

“Mr. Hoppel set the standard for our program and we have been chasing that standard for 60 years,” former Beaver Local wrestling coach Jordan Williams said. “This program’s tradition of hard work, dedication and high standards of conduct began with him.”

Hoppel passed away Saturday at the age of 77 after a lengthy illness. His impact on the program began with the first of his three state titles and is still being felt to this day.

“He’s someone who was very much still ingrained in the program,” Beaver Local Superintendent Eric Lowe said. “He was well known among our current wrestlers; the kids would see him at meets. He was looked up to and widely respected.”

“Regardless of where you go in this state, people who are knowledgeable about wrestling understand what he accomplished and link Beaver Local to him. He is a legend both in this program and in the state of Ohio,” Williams said. “He won three state titles at a time when Ohio did not have any divisions. He would have competed against much bigger schools.”

Hoppel finished his career with a 99-2 record and was never pinned. He was honored at the 2000 state wrestling tournament as one of the top 15 all-time Ohio high school wrestlers.

Longtime close friend Gary Bookman grew up with Hoppel and wrestled with him at Beaver Local. He remembers seeing his dedication to the program close-up.

“He would go around in his car and make sure everyone who needed a ride to practice got there on time,” Bookman said. “By the time we got to practice his car would be packed. He always made sure everyone felt included, even the lesser wrestlers.”

Bookman often wrestled against Hoppel in practice and got a taste of the difficulty he gave wrestlers across the state.

“We were separated by one weight class,” Bookman said. “I was a pretty good wrestler, but when I went up against him in practice it was clear that he was on a completely different level than me. He was unbelievable. He made everyone else better and made us proud to be a part of the program.”

Hoppel was the youngest of five sons in the famous wrestling family.

Carl, along with his brothers David, Jim, Darryl and Herm combined for six state titles during their high school careers. Darryl and Jim went to East Liverpool High School and became the first brothers to win state titles in the same year in 1955.

“Because of his family, he was very knowledgeable about the sport,” Bookman said. “The coaches relied on him a lot, he was a natural leader.”

Those who encountered Hoppel after his high school career remember him being generous with both his time and his spirit.

“The first time I met him was during the construction of the Mangano sports complex,” Williams said. “Mr. Hoppel and many other Beaver Local wrestling supporters were donating their time to lay brick at the facility. My brother and I were there for youth practice, and Carl never missed an opportunity to have us help move some block or talk about wrestling. He was a fun, positive person to be around. He loved to make jokes and always had a smile on his face.”

“Throughout my wrestling career he always attended the Hoppel Tournament along with the state tournament,” McComas said. “I can remember how important it was to me that I wrestled well and put on a show when he was watching. After a good match he would simply give a grin and nod his head. Believe me, that was special.”

What sticks out most for Williams was the pride Carl took at watching his son, Adam, help carry on the family legacy by capturing a state wrestling title for the Beavers in 2002.

“He understood the work and effort it took to reach that level,” Williams said. “Watching his son accomplish a goal he set for himself was special to him and was special to see. It’s something that brought a great deal of joy to him.”